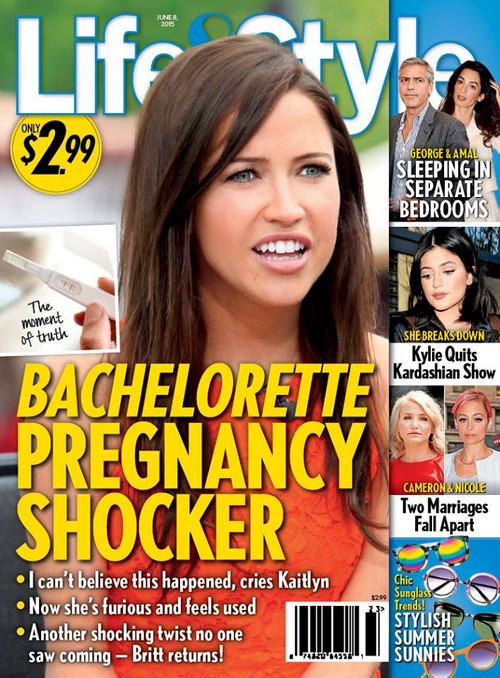 Is ABC’s Bachelorette Kaitlyn Bristowe pregnant? Bristowe is currently searching for love and possibly a husband on Season 11 of the popular reality TV show – but according to a new report she may have found a little more than she bargained for while dating the 25 guys…like a baby-daddy. The June 8 cover of Life & Style Magazine revels that Kaitlyn Bristowe is pregnant!

It seems like every year around this time rumors pop up teasing that The Bachelorette got pregnant while filming the show and sleeping with one of the guys she is dating – and Kaitlyn Bristowe is no exception. Except, for the first time there could actually be some truth to the rumors because we know for a fact Kaitlyn had sex with at least one of the Bachelors – Nick Viall, it was revealed in a spoiler video for Season 11 of The Bachelorette.

The June 8 cover of Life & Style Magazine features a photo of Kaitlyn Bristowe, and a positive pregnancy test! The headline screams, “Bachelorette Pregnancy Shocker!” The magazine goes on to tease that Kaitlyn Bristowe is “hurt and confused” and The Bachelorette “feels used.” Apparently Kaitlyn “Can’t believe that this happened.” The obvious question on everyone’s mind is – who is Kaitlyn’s baby-daddy? Could it be Nick Viall? Or did she have sex with more than one guy while she was filming the television show? Could this finally be the season that The Bachelorette winds up pregnant – for real?

In other Bachelorette news, the Life & Style cover also teases a shocking twist, “Britt Nilsson returns.” If by “shocking twist,” the tabloid means that Britt appears on the show again while producers film segments of her dating her boyfriend Brady Toops – then we have all already known that for weeks, and there is nothing “shocking” about it.

What do you think Bachelorette fans? Could Kaitlyn Bristowe really be pregnant? If so, who do you think is the father of her baby? Let us know in the comments below and don’t forget to check CDL for all of your Bachelorette spoilers and news!