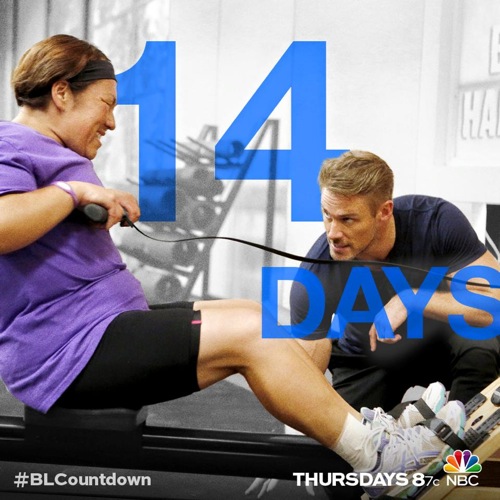 Tonight on NBC The Biggest Loser which features over weight contestants competing to lose weight to win money returns with an all new Thursday January 15, season 16 episode 16 called “The Comeback” and we have your weekly recap below. On tonight’s episode a player returns to the game and the final five tackle a rowing-and-basketball challenge; one contestant worries about maintaining a healthy lifestyle at home.

On the last episode, the contestants had made it to the fan-favorite makeover week in an exciting episode that also brought game-changing surprises. Fashion expert Tim Gunn and celebrity hairstylist Ken Paves returned to create more inspirational transformations, working their makeover magic on the final four ranch contestants as well as the two eliminated players at Comeback Canyon. After the ranch contestants got incredible new looks, they were reunited with their loved ones on a downtown rooftop overlooking Los Angeles. It’s a magical night that also featured a surprise live performance from popular singer/songwriter Gavin DeGraw, performing his hit solo, “Fire.” Meanwhile, the made-over Comeback Canyon contestants were treated to emotional reunions with their loved ones separately, 15 weeks after leaving home. And the stakes had never been higher at Comeback Canyon, because this week’s weigh-in winner ended up joining trainer Bob Harper in his long-awaited, surprise return to the ranch, bringing his Comeback Canyon champ to join the competition. And that’s not the only surprise awaiting the contestants at this week’s weigh-in. Did you watch the last episode? If you missed it, we have a full and detailed recap right here for you.

On tonight’s episode as per the NBC synopsis, “trainer Bob Harper has finally returned to the ranch, and this week he reveals which player he is bringing back from Comeback Canyon to rejoin the competition. While the four other finalists are excited to see their friend, they are also more determined than ever to stay in the competition. One contestant struggles with this new curveball in the game, while another shares concerns with their trainer about being able to continue their new healthy lifestyle once they get home. Later, it’s time for a rowing and basketball challenge that awards the winner a one-pound advantage, a valuable prize at weigh-in as the final five become the final four.”

The Biggest Loser season 16 episode 16 airs at 8PM on NBC and we will be live blogging it with all the up-to-the-minute details. So make sure to come back to this spot and spend the evening with us! Make sure to refresh often to get the most current details and updates!

On BiggestLoser, Ali tells the players they have one more surprise left. The doors open and there’s Bob Harper. He comes in and says it’s about to get crazy. Bob tells them he’s back and will be there until the end. He says he didn’t come alone and opens the door and they see Woody is with him. Woody is thrilled to back at the ranch. Bob tells them all about Comeback Canyon and the second chance that it offered.

Rob says this thing is hard and starts talking about how he’s glad that Woody is back but that means he’s one week back from the end. Dolvett tells him that’s life and that is constantly throws you challenges. Ali tells them it’s final five and it’s game on. Dolvett says Rob’s temper is a reaction to losing control and says he has to get to the bottom of it. He talks to him and asks why this is any different than any other curve ball the show has thrown.

Dolvett says they all have a right to be angry but it can’t be the loudest voice in your head. He tells Rob that anger is the only emotion he lets play. He tells him to stop letting anger control you. Rob says he never let the anger go before he got there – he says he just ate his feelings. Rob says he needs to express it, but just isn’t doing it the right way. Dolvett says he needs to let go and says when he does that in a healthy way, he’ll have the balance he’s missing.

Rob says he doesn’t like being angry and wants to be there with the great people and is glad he’s got Dolvett in his corner. Lori is thrilled she gets to work out with Bob. She says when she thinks Biggest Loser, she thinks Bob. He says he’s going to work them all today and Bob says he’s dying to get his hands on all of the final five contestants. Lori says he’s ready to show Bob that she’s an athlete and how far she’s come since week one.

Toma is working hard and doesn’t want to be in the bottom three again. Bob calls him an athlete and says he’s going to go a long long way. Dolvett says Bob being back feels like the good old days. He thinks the competition level is going to get more intense with him there. Bob goes to work with Rob and says he thinks they’re a lot alike. He says neither of them trust easily and he gets that. Bob wants him to work on the vertical but Rob is scared.

Rob is terrified and thinking of all the things that could go wrong if he doesn’t make it. He walks off and Bob tells him he’s going to a crazy place and needs to get it under control. He tells him that his body can get up there if he goes fearless. He jumps and makes it and Rob is elated. He says he was worried about working with Bob but now says he really gets him. Bob says this is about standing up and keeping on fighting when life kicks you in the teeth.

Ali greets the final five on a basketball court for today’s challenge to row and throw. They have to row 2,000 meters on a rowing machine and then they get five medicine balls from six to 10 pounds and they have to shoot them into a hoop from behind the free throw line. The winner gets a one pound advantage. Woody says he knows what one pound can mean at this stage and Sonya really wants it too. They start the challenge.

Lori says rowing a mile is incredibly hard. They are all very close as they pass the halfway point. Sonya is just slightly behind the others. Toma is done first and then Woody close behind. Rob is done next. Rob shoots granny style and shoots one right away. Rob, Toma and Lori are each tied at two but they’re getting harder. Woody gets one as Toma and Rob hit three. Sonya is last off the rower. Rob hits four and then Toma does then Lori. It’s down the last.
– –
Rob and Toma run up to make their last shots. Toma and Rob sink them at what looks like the same time. They have to go to a photo finish and Ali says the winner is Toma. He gets the one pound advantage. Toma is thrilled to win his first individual advantage. Rob isn’t happy but says he’s happy with the progress he’s made today. Bob and the other three trainers are in the last chance workout. Bob wants Woody back in this for good.

Dolvett rides side by side with Toma and says he’s happy to see the confidence in his eyes. Jessie says Lori knows how to finish strong. She talks about her success being linked to her confidence and says she lost it when she retired. She was 220 when she retired from the softball team and is now very close to the weight she was 10 years ago. Jen gives Sonya a pep talk about insecurity. She tells her she’s scared to death and Jen tells her it’s important to know things won’t be perfect.

Rob is near tears and says he’s feeling all of his emotions. Dolvett tells him he’s authentic. He’s down 4.55%. Woody weighs in last. It will be either he or Lori eliminated tonight and the other will make it to the final four. Woody began at 398 and was 285 last week. He has to lose more then seven pounds to stay. He’s down to 274. He lost 11 pounds. He lost 3.86%. Lori is crushed. Ali tells her she’s eliminated from the competition.

Lori thanks the trainers and says she needed them to show her what her true fears were. Jessie says she had one foot out the door when she started and made it this far. He hugs her and says she’s an amazing human being. Ali tells her she’s got her great family waiting at home for her and Lori goes. Lori says she started out a broken person at 301 pounds and needed to change what was on the inside. She lost a total of 81 pounds but says it was a lot more in emotional weight. Lori is now down to 210 after leaving the show.