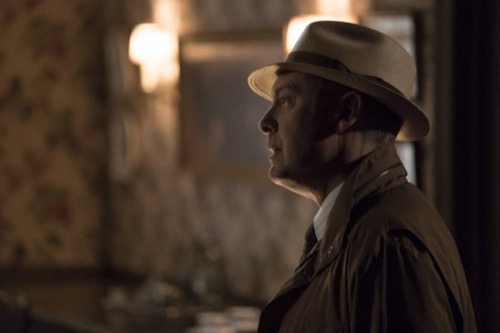 Tonight on NBC their criminal drama, The Blacklist starring James Spader continues with an all new Thursday October 22, season 3 episode 4 called, “The Djinn,” and we have your weekly recap below. On tonight’s episode, Red (James Spader) enlists a task force to locate the Djinn, an enigmatic woman who fulfills revenge fantasies.

On the last episode Red and Liz headed toward the Midwest in their quest to take down the Cabal and exonerate Liz. Meanwhile, Ressler, Samar and Aram discovered what could become a global food crisis. Did you watch the last episode? If you missed it, we have a full and detailed recap right here for you.

On tonight’s episode as per the NBC’s synopsis, “Red enlists a task force to locate the Djinn, an enigmatic woman who fulfills revenge fantasies. Red and Liz believe the Djinn can lead them to the Cabal and help them exonerate Liz.”

Tonight’s episode of “The Blacklist” kicks off with a man named Gerald in some sort of lab with a man lying on a table, a woman injects a syringe in to the man’s arm and tells him that the “hour of vengeance has arrived.” She offers him dinner, and then leaves. The man on the table wakes up and begins panicking as Gerald starts sharpening a knife and preparing to murder him.
Meanwhile, Red is meeting with a man about Dembe, inside Aram’s apartment. He has brought photos along of the man that kidnapped Dembe – his name is Solomon, he’s a lone wolf now, but he is former CIA. Red tells the man that he doesn’t care if Solomon is MIA, he wants him to find Dembe.

Aram comes home and is shocked to find Red and Elizabeth in his apartment – he hugs her and tells her that she “looks fantastic.” Red informs Aram that they need his help, they are looking for a woman named Djinn, she makes people’s fantasies come true. They need Aram to help them, the only have a web address to go on. Aram is nervous, he thinks that he should tell Ressler. He reveals that Tom is back, he paid Ressler a visit and offered to help but Ressler turned him down.

Cooper decided to take Tom up on his offer though – he is currently meeting with him. Cooper gives Tom everything he has on Karakut, he tells Tom that if he wants to help Liz, he needs to find Karakut – his sister is married to a crime lord named Charlie and that might be their way in. Tom doesn’t understand why Cooper has come to him, he explains that he needs someone who can “bend the rules.” He warns Tom that if he gets caught he is on his own.

Aram heads to the office, he tells Ressler that Elizabeth and Red were at his apartment. Red told him to report them, because he needs the FBI’s help finding Djinn – they think that she can help them clear Agent Keen’s name. In the early days of the web, Djinn operated off from a virtual gaming website. Once you locate her avatar on the website, she invites you in to a private chat room and you give her your contact information and she comes to you.

Dembe is still being held hostage with another prisoner, and hes working hard to make some sort of shank. Back at the FBI, Samar is working hard to get information on Djinn. They think that they may have found a lead, and Djinn just kidnapped Bahram Bakhash – the owner of Azari Financial. Ressler tells Aram and Samar they they need to find her motive, and who hired her…and what connection that has to Agent Keen.

Elizabeth and Red are spending a ton of quality time together on the run, Red is sharing stories from his childhood and a book he used to read. Elizabeth’s phone goes off – she has landed a meeting with Djinn tomorrow morning at a park at 9:00 AM. She wants to know how the Djinn is going to help them, red explains that she is on the Kabul’s payroll and she has done more than one job for them.

Samar and Ressler bring in Bahkash’s son for questioning – he explains that his father was on the way to a board meeting to discuss a hostile takeover. A company called New Castle was trying to buy them out. But, he doesn’t think it had anything to do with his father’s disappearance, buyouts happen all of the time. After their meeting, Hamid calls his sister to let her know that the FBI is going to help them find their father, little does he know – his sister is the one who had him kidnapped and she is currently torturing him.

The next morning Elizabeth heads to the park to meet Djinn, she finds a cell phone on the park visit and picks it up. Djinn calls her and tells her to walk through a gap in the fence and in to a diner to use the portable restroom. While Elizabeth is walking a bunch of police officers run past her and arrest someone else in the park. Elizabeth follows Djinn’s instructions and gets in to a car that is waiting for her, Red freaks out because he loses her and doesn’t see where Elizabeth goes.

Elizabeth arrives at her meeting with Djinn, she asks Elizabeth what her fantasy is. Elizabeth says she wants revenge on the people that framed her. Djinn says she can’t help her, she knows that revenge isn’t what feuls Elizabeth’s soul and that isn’t her true fantasy. Before Elizabeth leaves, she manages to slip a tracker on to Djinn’s shoes.

Elizabeth returns to the hideout, she calls a diner where Tom used to go, even though she promised she wouldn’t call him. The waitess says that Tom was hoping she would call – an gives her his cell phone number. Red returns and Elizabeth hang up quickly, apparently the tracker that she put on Djinn’s shoe worked – and Red has an address for her. Meanwhile, Dembe and the lawyer he was locked up with work together and break free. But, once they are free – the lawyer turns on Dembe and stabs him and leaves him in a truck and runs off.

Red and Elizabeth arrive at Djinn’s house – she’s just a normal housewife named Alice. Red can tell that she is a fake. Alice confesses that she isn’t the real Djinn, she is just the “face of the operation” she used to work at a comic book convention and Djinn recruited her. Red wants Djinn’s name and information – he promises to help Alice take over the organization and become the real Djinn if she turns him over.

Back at the FBI, Aram realizes that New Castle is owned by Bahkash’s daughter Nasim – and she just bought out her own father’s company. They realize that she kidnapped him and stole his company as her own revenge. Elizabeth and Red beat them to Nasim’s house – it turns out that she is the Djinn. She wanted revenge on her father because she was born a boy but she was gay – so her father Bahkash forced her to get plastic surgery and have her penis removed.

Ressler and his team aren’t far away, Red tells Nasim that they don’t care that she is Djinn – they just came to get her leather journal with all of her clients’ addresses. He promises to help her get away from the police – if she hands over her clients (the Kabul). Nasim has no choice but to hand over the journal – they rush to a helicopter that is waiting in the backyard – but Red won’t let Nasim in the chopper. As they are flying away, Red tosses the journal out of the helicopter down to Ressler.