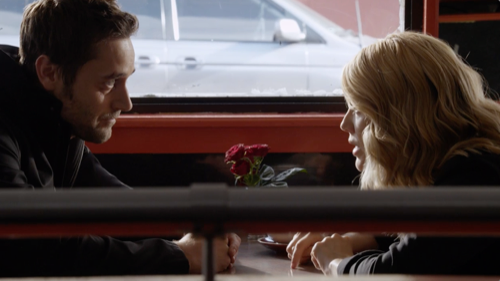 Tonight on NBC their criminal drama, The Blacklist starring James Spader continues with an all new Thursday November 12, season 3 episode 7 called, “Zal Bin Hasaan,” and we have your recap below. On tonight’s episode, Samar’s (Mozhan Marnò) tragic past resurfaces when the team tracks an elusive international terrorist.

On the last episode a trusted adviser of the Director went missing. Red and Liz try to tracked the adviser down, only to steer toward a violent confrontation. In other events, Tom entered a savage “fight club” to locate a man who was able to exonerate Liz. Did you watch the last episode? If you missed it, we have a full and detailed recap right here for you.

On tonight’s episode as per the NBC’s synopsis, “Samar’s tragic past resurfaces when the team tracks an elusive international terrorist. In other developments, the FBI and the Cabal make significant strides in their search for Liz and Red, and Tom faces obstacles in his plan to exonerate Liz.”

Tonight’s episode of The Blacklist kicks off with a flashback to Iran in 1992, a little boy is playing outside with his sister. A man rushed out of the house, the kids see a man rush out of the house – they head inside and their father and mother are both dead. The little girl vows to always be there and always protect her little brother.

Present day – there is a knock at Harold’s door, its Tom Keene. Harold whispers that Tom can’t be at his house, Tom announced that he has Karakurt locked in the truck of his car. He drives the car in to the garage and pops the trunk – Karakurt is awake and he and Tom get in to a bit of a scuffle. Harold’s wife walks in and witnesses the entire thing.

Red and Elizabeth are watching the news in the kitchen at a restaurant – 6 employees were abducted from Lazarum, the US is treated it as an act of terrorism. The owner of the restaurant arrives, he wants Red to leave – he is a liability. Red needs his help with something, he offers to deliver Zal Bin Hasaan, in exchange for the restaurant owner’s help. He agrees that if Red brings in Hasaan, he will see that Red gets a meeting with his boss. Afterwards, Liz wants to know how Red thinks he is going to pull this off. Hasaan is dangerous, and he is responsible for abducting the employees at Lazarum.

Red leaves and calls Samar at the FBI, they are already working the Lazarum case. Samar has a personal interest in the Lazarum case – and Hasaan put her in the ICU when she was working in Cairo. Meanwhile, Solomon is working on finding Elizabeth. He arrives at the diner where Elizabeth called Tom. The waitress gives Solomon Tom’s cell phone number.

Samar briefs Aram and Ressler on everything she knows about Hasan, they bring up her brother’s death and think that Hasaan is also responsible for killing him. A video is sent to several news outlets, it’s the Lazarum employees reading a script that their kidnapper gave them. In the video one of the men is shot in the head and killed. After Ressler sees the video he tells Samar to reach out to her contacts in Egypt and get everything she can find on Hasaan.

Samar spends the day analyzing the video from the kidnappers, she uses the flash from the fun shot to get images in the background and they are able to spot some stuff in the background in the video and get a location. Samar and Ressler get strapped up and head to the location, Samar calls her old agents that used to follow Hasaan with her. They storm the building and a shootout ensues – when the smoke clears, Hasaan is gone and all of his men are dead.

They find cages in the back of the building with prisoners that Hasaan had taken – one of them is Samar’s brother Shaiid, who is apparently not dead after all.

Samar calls Red, freaking out, she accuses him of knowing that her brother was alive this entire time. Red reassures her that he had no idea her brother didn’t die in 2009. He promises to make a few phone calls. Meanwhile in Harold’s garage, Tom Keene is trying to talk to Karakurt, he isn’t exactly cooperative, he has already tried to kill himself once. Tom roughs him up while Harold and his wife Charlene sit in the kitchen and listen to them banging around.

Samar sits down with her brother back at headquarters – he explains that he faked his death, he had to run and hide. He didn’t reach out to Samar because he didn’t want to put her in danger, he travelled to England and started a new life – but he realized that the regime was watching him. So, he moved to America to start over again, only then someone came from the regime and kidnapped him and locked him up in the cage.

Elizabeth and Red are still searching for Hasaan – they visit a man named Farzin that was smuggling men for Hasaan. Red waves his gun in his face, an Farzin caves and gives him an address to find Hasaan. While Red is arguing with Farzin, Tom calls Elizabeth’s cell phone – he says that he has to talk to her immediately. Red advises against Elizabeth meeting up with Tom.

Red and Elizabeth head to the address that Farzin gave them – in search of Hasan. When they arrive, Red finds a man shaving in the bathroom, he introduces himself as Hasaan. But, Red isn’t buying it – he knows that Hasaan is supposed to have third degree burns on his back. Meanwhile, back at FBI headquarters Samar is keeping an eye on her brother but he is acting suspiciously. She warns him that since he snuck in to the country illegally, they are filing papers to deport him and send him back to Iran. Samar reassures him that she is going to try and help him and get him political asylum so he can stay.

Elizabeth meets up with Tom at the diner, he raves about how great she looks. He tells her that she is going to finally get the normal life that she has always wanted – he found Karakurt, he tells Liz that he is going to confess to everything and clear her name. It is all finally over. Tom wishes that he never walked away from Liz when she was in trouble. Elizabeth understands – she wanted him to follow his dreams. But, his dreams have changed, now his dreams are to be with her.

Ressler storms a restaurant – he finds Solomon sitting at a table and eating soup. Ressler checks his jacket pocket and takes his gun – Solomon scoffs that he has a permit to carry the gun. Ressler drops his permit in the soup and says since he can’t read it anymore he is going to have to take him down to the station.

Red calls Samar, he tells her to get out of the building ASAP. He tortured the fake Hasaan until he talked, he revealed that the real Hasaan was one of the prisoners that they found in the building and brought directly in to custody. While Samar is on the phone with him, a bomb goes off inside the building. She pretends to be dead while the hostages are racing around and shooting the agents that are there. Samar hides around the corner and realizes that her brother is Hasaan.

Hasaan has taken all of the agents hostage from Egypt that were working his case, one by one he lines them up and shoots them in the head. Hasaan won’t stop until he gets the full list of Mossad agents that have been working on capturing him. Samar sneaks outside and calls Red, he tells her that there is nothing she can do and her only job right now is to stay alive. Samar hangs up and says that she needs to stop them. She and one of the Mossad agents get down to the office and take the list of agents out of the safe and burn them. Her brother Hasaan arrives, he and his men take Samar hostage and leave the building right before Ressler and his men arrive.

Hasaan tries to board a boat with Samar – but Red and Dembe come to the rescue. Red tells Samar that she has two choices, she can let the FBI have Hasaan or she can let Red have him. Hasaan cries that Samar promised to protect him, but as far as she is concerned – her brother died years ago. Hasaan says that Red can have him and use him to clear Elizabeth’s name.

Ressler shows up at Cooper’s house, he is not happy when he finds Tom there. Keen reassures him that he is trying to help Liz too – Ressler snarks that he will never trust him and then he storms out of the house. Ressler and Tom wind up in a fight in Cooper’s front yard. Harold runs outside to break it up.

Later that night, Red and Dembe deliver Hasaan to the restaurant owner – he tells Red that he will set up the meeting with his boss that he promised.