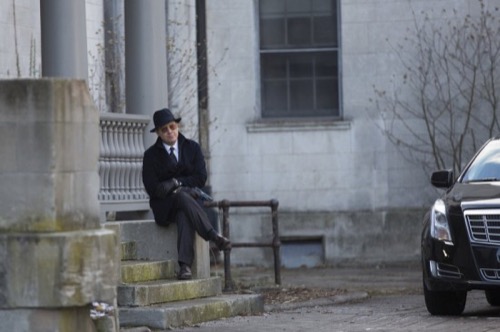 Tonight on NBC their criminal drama, The Blacklist starring James Spader continues with an all new Thursday February 5, season 2 episode 10 called, “Luther Braxton: Conclusion,” and we have your weekly recap below. On tonight’s episode, FBI boss Cooper (Harry Lennix) tries to rescue his team in the wake of chaos at a detention facility. Elsewhere, thief Luther Braxton (Ron Perlman) attempts to attain confidential information.

On the last episode when the elusive Reddington (James Spader) was arrested and taken to a secret detention facility Liz (Megan Boone) and the task forced set out to save Red before he disappeared forever. Meanwhile, Red encountered Luther Braxton (guest star Ron Perlman) at the detention facility, a thief that he shared a complicated history with. Diego Klattenhoff, Harry Lennix, Amir Arison and Mozhan Marno also star. David Strathairn and Janel Maloney guest star. Did you watch the last episode? If you missed it, we have a full and detailed recap right here for you.

Tonight’s episode of “Black List” kicks off right where we left off last week, Luther, Red, and Liz are in the guard tower at the prison – Luther announces that he “knows about the girl.” He looks at Liz and says, “she was there that night wasn’t she – she is the one.” Before Luther can say anything else, the CIA’s bombs are launched at the prison and all hell breaks loose. After a brief struggle, Donald manages to cut Samar down from her noose right before she chokes to death. At the agency, Harold is furious when the CIA informs him that they are not calling the coast guard for search and rescue and they are going to pretend that nothing happened.

Donald and Samar find Reddington in the prison – he reveals that Luther took Liz and jumped on the helicopter with her. They are trying to figure out how to call for help since all of the radios down, Red tells them they better get help fast because the prison is sinking. Meanwhile, Luther and Liz are preparing to land the helicopter at a hospital. He teases her, “how does it feel to have something that everyone wants locked in that head of yours?” Liz snaps back that she doesn’t remember anything or know what he is talking about.

They land at the hospital and Luther takes a doctor hostage and pushes her in the room. At the agency, Harold’s team confirms that Luther was spotted at a hospital. And, they get a SOS signal from the prison. Harold tells the CIA that he is sending in a rescue team whether they like it or not – because his people could still be alive.
Luther and his men torture Elizabeth with ammonia and try to get her to tell them about the Folcrom. Liz insists that she doesn’t remember anything about the Folcrom or the fire. Luther brings in a psychiatrist and kidnaps her son – he tells her that if she doesn’t get the memories he needs out of Liz’s head then he will kill her son.

Red, Samar, and Donald get off the island and Red speaks on the phone to Luther, he realizes that Luther brought in a psychiatrist to try and recover Liz’s memories. He tells Samar to get information on every psychiatrist that has ever been in contact with Luther. Meanwhile, the CIA is working on a cover story for the bombing at the prison. Harold’s team discovers that the doctor that Luther took hostage is Selma Orchard, and she was actually the same doctor that used a mutated gene to erase Luther’s memories.

Selma gets to work on Liz, she gives her a sedative and warns her that she will be entered in to a lucid dream state. Once Liz passes out, Selma begins talking to her about the fire, she tells her to “pretend that she can float and breathe in and out.” Liz begins to see a little girl in her dreams, Selma explains to lucid Liz that she is the little girl and orders her to open her eyes.

Liz remembers the night of the fire, she was in the closet with her bunny while her parents were screaming at each other, Liz learns that her parents are fighting about Marsha – the little girl in her dreams tells her not to leave the closet but she does anyways.

Liz starts going in to convulsions and hyperventilating in her sleep, Selma says that she has to wake her up before she died – her blood pressure is through the rood. Selma gives her another shot to bring her out of her lucid dream. Liz wakes up and begins gasping for air and screams “My father was there.”

Luther heads out to meet with a client, and Red tracks him down. Red demands to know where Elizabeth is, Luther taunts that “maybe he is dead,” and begins talking about Belgrade again. Red laughs that he doesn’t even remember Belgrade, and forces him to get in the car with him. Meanwhile back at the pool, Selma puts Liz back to sleep. Liz says The Folcrom was the “only thing keeping her father alive,” and one of Luther’s guys begin recording her on his cell phone.

Red arrives at the pool where Selma is working on Liz, she is passed out and still unconscious. Selma explains to Red that right before he came in Liz had just mentioned The Folcrom. He asks Selma if it will hurt her to keep remembering. In Lizzie’s dream there is a gunshot where her parents are arguing, and the house goes up in flames. Donald and Samar barge in, and order Selma to wake Liz up, but Selma refuses because it is too dangerous. Liz opens her eyes from her dream finally and looks Red in his eyes and announces that “you were there” the night of the fire.

The agents lead Selma out of the pool room and leave Red and Liz alone. Liz tells Red that she knew he was at her house the night that it burnt down because he was looking for the Folcrom. Lizzie cries that the only reason Red is in her life now is because he wants back The Folcrom, not because they have any connection. She blames Red for killing her father, Red tells her that it is not that simple and the memories of a four year old can’t be reliable.

Red pays the leader of the clandestine group and the CIA a visit and brings along Luther’s dead body. He calls Red a thug, and warns him that they will not hesitate to “cripple Red.” Red snaps back he has the Folcrom – the leader laughs that Red is bluffing and Red dares him to “call his bluff” before he heads outside.

Liz meets with Selma, she wanted to warn her that based on the way that she responded to the lucid dreams, someone has already tried to block her memories. She warns Liz that whatever she remembers from that night, she is remembering in a jumbled order and may or may not be correct. Liz heads home and finds a stuffed rabbit from her childhood, she rips open the rabbit and finds a tiny black box inside…the Folcrom.