The Bold and the Beautiful (B&B) Spoilers: Liam Calls Off Engagement? Quinn and Thomas Scheme to Get Steffy with Wyatt! 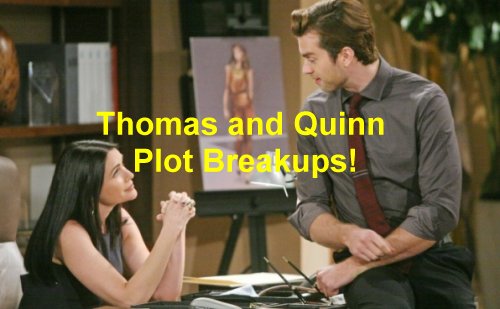 “The Bold and the Beautiful” (B&B) spoilers tease that Steffy (Jacqueline MacInnes Wood) ratting out Ivy (Ashleigh Brewer) for smooching with Thomas (Pierson Fode) could ultimately end her engagement with Liam (Scott Clifton).

First, can we agree that Steffy is being a bit harsh with the word “cheating”? Sure you don’t want your girlfriend kissing someone else, but Steffy makes it sound so much dirtier. Of course, that was some pretty hot kissing going on between them.

Second, Steffy is not making a big deal out of this because she’s so terribly moral. She’s doing it to stir up trouble for Ivy who was her rival for so long. If Ivy and Wyatt (Darin Brooks) were not part of the equation, Steffy would not care who Thomas was pursuing.

But will Liam see Steffy’s inability to butt out of this as a sign that she’s not ready to settle down with him? Steffy sure seems obsessed with ending Ivy and Wyatt – is that because she’s still carrying a torch for him that Liam will notice?

Steffy’s meddling is bad enough, but “Bold and the Beautiful” spoilers hit that Quinn (Rena Sofer) and Thomas may scheme together to make this whole situation worse. Quinn doesn’t like Wyatt with Ivy and Thomas sure as heck doesn’t.

When Quinn implies that they can both get a win out of busting them up, it’s likely Thomas will jump at the chance. He’ll get the girl he wants – and Quinn will make sure Wyatt gets the girl she wants for him. Too bad Liam will be collateral damage.

But just what will Quinn and Thomas work up to get Ivy and Thomas together and Ivy and Wyatt apart? Will Quinn drag Wyatt away on more business trips? And is their plotting a moot point now that Steffy spilled the beans to Wyatt?

Ivy will plead for him to forgive her – and Wyatt just might – he does care for her, after all. If it was anyone but Thomas that she had kissed, Wyatt would likely let the kissing news roll off of him with a shrug, but Thomas is his nemesis.

That’s like Superman finding out Lois Lane was making out with Lex Luthor. It’s just not cool. But even if Ivy can talk Wyatt down and get him to agree to reconcile with her so long as she stays way from Thomas, their relationship may be doomed.

There are just so many forces working to split them apart. Plus, Quinn and Thomas also need to split Steffy and Liam to make their plan go the way they want it. Fortunately for the devilish duo, Steffy may ruin her relationship without their meddling.

B&B rumors indicate that Liam will overhear Steffy saying something he really doesn’t like next week and they may be on their way to Splitsville. Will Liam take back the rock he gave Steffy? Will Quinn and Thomas agree to conspire?

With a near-death experience coming on Friday’s B&B for Ivy, Wyatt may soften his anger, but for how long? Check back with CDL often to find out how these plans play out and for more “Bold and the Beautiful” spoilers and gossip!