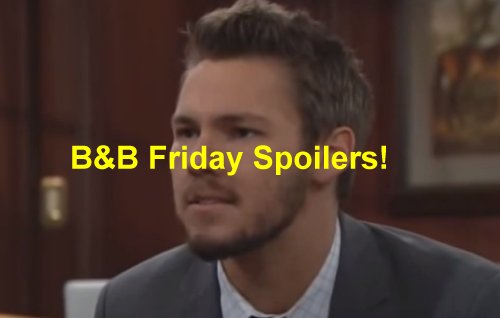 “The Bold and the Beautiful” (B&B) spoilers for Friday, December 4 tease that Liam (Scott Clifton) will be furious with Steffy (Jacqueline MacInnes Wood) for going against his wishes.

Liam felt that Ivy (Ashleigh Brewer) should’ve been the one to tell Wyatt (Darin Brooks) she cheated with Thomas (Pierson Fode). Unfortunately, Steffy couldn’t resist spilling the beans and now she’ll try to defend her actions.

B&B spoilers say Steffy will think it was her duty to tell Wyatt since Ivy didn’t do it. Liam will reply that Steffy didn’t give Ivy a chance. It seems this is the beginning of big strife for this couple.

Meanwhile, the conflict will continue at the beach house. Wyatt will lash out at Ivy for turning to Thomas while he was in San Francisco. Wyatt would’ve been bummed about Ivy cheating with anyone, but the fact that it was Thomas makes her unfaithfulness even worse.

Alas, it appears Wyatt will decide that he just can’t trust Ivy now. Ivy will plead for forgiveness, but Wyatt will be in too much pain to accept her apology. However, an electrical glitch at Forrester could change everything.

“The Bold and the Beautiful” spoilers indicate that a fire will break out in a prep area. At some point, Ivy will end up getting electrocuted. This shocking moment will put Ivy’s life in danger and will undoubtedly cause Wyatt to rethink his position.

It looks like Wyatt will adjust his attitude after Ivy’s brush with death. Sometimes almost losing someone can make you never want to let him or her go. The accident will bring Wyatt and Ivy closer, but the same can’t be said for Steffy and Liam.

“The Bold and the Beautiful” spoilers reveal that Steffy will share part of the blame for putting Ivy in such a dangerous situation. This could put Liam and Steffy on the outs for quite a while.

Will their relationship begin to crumble? Stick with the CBS soap for updates on the rocky road ahead. So B&B fans, what do you think about the news that Liam will rip into Steffy for spilling Ivy’s secret?

Are you surprised that Wyatt won’t forgive Ivy initially? Will Ivy and Wyatt’s romance grow stronger after her ordeal? Can Steffy and Liam get back on the same page?