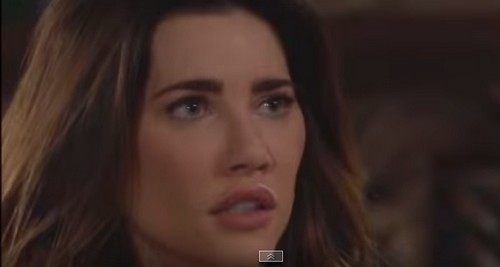 “The Bold and the Beautiful” spoilers for Monday, August 17, tease that Steffy (Jacqueline MacInnes Wood) will be stunned that Ivy (Ashleigh Brewer) shot a video at the scene of Aly’s (Ashlyn Pearce) death. Steffy will wonder why Ivy even has this footage in the first place. If Ivy really thought Steffy was coming after Aly, she should’ve gotten out of her car and tried to calm everyone down. Nevertheless, the past is in the past and now this incriminating clip exists. Steffy will say she’s not going to let Ivy threaten her. After all, Steffy was in fear for her life. If Steffy hadn’t defended herself, she might have ended up dead instead of Aly.

Thomas (Pierson Fode) will admit that this situation isn’t optimal. “The Bold and the Beautiful” spoilers say Thomas will tell Steffy that he knows she’s innocent, but this video looks bad—VERY bad. The clip doesn’t show any of the events leading up to the fatal blow. If B&B viewers hadn’t seen the entire thing play out on screen, we might be calling Steffy a murderer, too. There’s no denying that Ivy has the advantage here. Ivy holds Steffy’s fate in the palm of her hand and she can turn the tables with the push of a button. The rumors hint that Ivy will continue to hold the evidence over Steffy’s head over the next couple of weeks.

Steffy will stand up to Ivy and demand that the video be deleted. It doesn’t reveal the whole story and it could easily be misconstrued. Unfortunately, Steffy may already be in big trouble. “The Bold and the Beautiful” spoilers indicate that Lieutenant Baker (Dan Martin) will arrive at Forrester Creations looking for Steffy. Baker will say he has some questions about Steffy’s role in Aly’s death. It’s clear that this case is far from wrapped up. The cops haven’t even seen the footage yet and suspicions are still swirling. Ridge (Thorsten Kaye) will be surprised that the police aren’t satisfied with what Steffy previously told them. Stick with the CBS soap for updates on the investigation.

So B&B fans, what do you think about the news that the police will ask more questions? Will Steffy’s actions soon be discovered? Will Steffy convince Ivy to delete the video or will Ivy want to hang onto her golden ticket? Let us know what you think in the comments below and don’t forget to check CDL tomorrow for the latest “Bold and the Beautiful” spoilers, rumors, updates and news.

See The Bold and the Beautiful video preview for Monday, August 17 below: