BY Heather Hughes on August 25, 2015 | Comments: one comment
Related : Soap Opera, Spoiler, Television, The Bold and the Beautiful 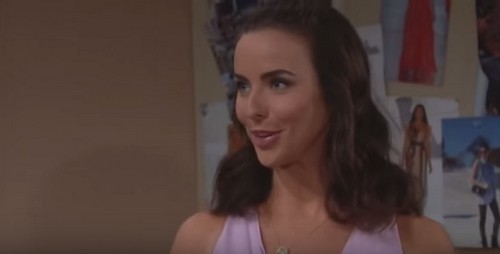 “The Bold and the Beautiful” spoilers for Tuesday, August 25, tease that Quinn (Rena Sofer) will encourage Wyatt (Darin Brooks) to stop letting Liam (Scott Clifton) win all the time. Quinn feels like Liam always steps on Wyatt to get to the top and she’s tired of seeing her son treated that way. However, Wyatt will indicate that he doesn’t know what Quinn expects him to do. Liam currently holds a position of authority over Wyatt, but that could change in the near future. Thanks to the incriminating video, Ivy (Ashleigh Brewer) has plenty of power and she may be willing to share a little with Wyatt.

B&B spoilers say Ivy will be thrilled that she’s been named the new face of Forrester Creations. Ivy will take the opportunity to gloat and Wyatt will offer his congratulations. Of course, this isn’t the end of the road for Ivy. There are more demands to be made, which means this power trip is far from over. Ivy intends on taking full advantage of the leverage she has. It appears Steffy (Jacqueline MacInnes Wood) is about to get pushed to her limit. Just how much will Steffy take before she fights back? The rumors hint that Steffy will reach her breaking point very soon. Stick with “The Bold and the Beautiful” to see what Steffy has in store.

Meanwhile, Thomas (Pierson Fode) will give Liam updates on where things stand between Steffy and Ivy. It’s clear that this battle is getting cutthroat. Nevertheless, Steffy really has no choice but to let Ivy walk all over her. Thomas will agree that Steffy is making the right decision here. At the end of the day, keeping Steffy out of prison should be the real goal. Liam will want to do whatever it takes to keep Steffy safe, even if it means playing dirty. It looks like Ivy’s blackmail scheme will ultimately backfire. Stay tuned to “The Bold and the Beautiful” to find out what Liam will be willing to do for love.

So B&B fans, what do you think about the news that Quinn will want Wyatt to stand up for himself? Will Ivy help Wyatt get the upper hand over Liam? Will Steffy and Liam come up with a good plan to fight back? Let us know what you think in the comments below and don’t forget to check CDL tomorrow for the latest “Bold and the Beautiful” spoilers, rumors, updates and news.

Watch The Bold and the Beautiful video preview for Tuesday, August 25 Right Here