The Bold and the Beautiful (B&B) Spoilers: Steffy Pressures Ivy to Confess to Thomas Cheating – Liam Wants to Protect Wyatt 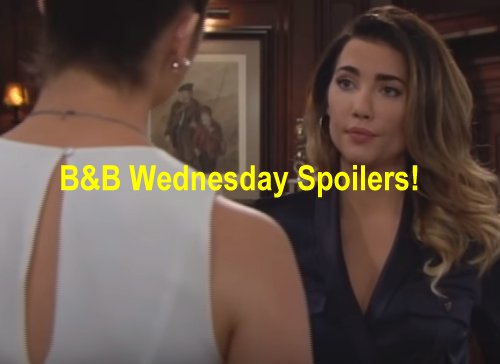 “The Bold and the Beautiful” spoilers for Wednesday, December 2, tease that Steffy (Jacqueline MacInnes Wood) and Ivy (Ashleigh Brewer) will have an intense confrontation.

Steffy is determined that Wyatt (Darin Brooks) is going to learn the truth about Ivy’s betrayal. If Ivy doesn’t tell Wyatt, then Steffy will do it for her. B&B spoilers say Steffy will insist that Wyatt has been honest with Ivy and that means she needs to be honest with him, too.

It looks like Steffy’s stance will affect Ivy’s actions moving forward. Ivy wanted to keep what happened with Thomas (Pierson Fode) a secret, but Steffy clearly won’t allow it. Ivy will decide she has no choice but to come clean about making out with Thomas.

“The Bold and the Beautiful” spoilers reveal that Ivy will worry about Wyatt’s potential reaction. Nevertheless, this is something Ivy needs to do. Ivy will hope that Wyatt will forgive her since she’s willing to be upfront about her cheating.

Unfortunately, Steffy still won’t be satisfied that Ivy is going to do the right thing. Liam (Scott Clifton) will beg Steffy to let this go. Wyatt will be crushed no matter how he gets the news, but hearing it straight from Ivy might soften the blow slightly.

Liam will want Steffy to stay tight-lipped so Ivy can approach this in her own way. Of course, Steffy will go against Liam’s wishes. Steffy isn’t the kind of gal who likes being told what to do.

Ivy will head to the beach house and nervously await Wyatt’s arrival. This confession could be a big deal for this couple. Wyatt thinks he can trust Ivy completely, but that’s obviously not the case.

Back at Forrester Creations, Steffy will prepare to give Wyatt some shocking updates about his relationship. Later this week, Wyatt’s heart will be broken and he may end up breaking Ivy’s heart as well.

Stick with “The Bold and the Beautiful” to see if this romance will come to a close. So B&B fans, what do you think about Steffy and Ivy’s conflict? Will Ivy be furious when she finds out that Steffy didn’t give her a chance to confess?

Will Wyatt lash out when he realizes that Ivy wasn’t entirely committed to him? Let us know what you think in the comments below and don’t forget to check CDL often for the latest “Bold and the Beautiful” spoilers, updates and news.