The Bold and the Beautiful (B&B) Spoilers: Steffy Tries to Save Ivy’s Life – Thomas and Liam Suspicious of Steffy’s Involvement 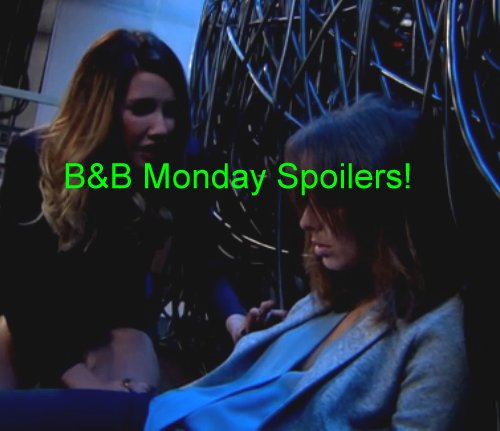 “The Bold and the Beautiful” (B&B) spoilers for Monday, December 7 tease that Steffy (Jacqueline MacInnes Wood) will frantically try to save Ivy’s (Ashleigh Brewer) life. When Ivy confronted Steffy about spilling her secret to Wyatt (Darin Brooks), things got pretty heated.

Ivy grabbed Steffy and Steffy responded with a shove. Unfortunately, Ivy landed on the malfunctioning electrical wires and now she’s not breathing. It seems history is repeating itself here.

Just like with Aly (Ashlyn Pearce), Steffy inadvertently caused the incident and she’ll probably want to cover up her involvement. Of course, Steffy wasn’t trying to hurt or kill Ivy, but she’ll still face some tough questions.

“The Bold and the Beautiful” spoilers say Thomas (Pierson Fode) will realize there has to be more to this story. Thomas will give Steffy a stern look and demand to know what she’s not telling him.

Later, Liam (Scott Clifton) will press Steffy for answers as well. It doesn’t take a rocket scientist to guess that Steffy had a hand in Ivy’s misfortune. B&B viewers are aware of Steffy and Ivy’s ongoing rivalry, but maybe this ordeal will finally end the feud once and for all.

Meanwhile, Quinn (Rena Sofer) will have to relay the terrible news. There’s a good chance that Wyatt will be the one Quinn has to inform. Wyatt was furious when he learned Ivy had been unfaithful and he promptly dumped her.

However, Wyatt will change his tune once he finds out that Ivy nearly died. Ivy’s electrocution will help Wyatt understand that he doesn’t want to live without her in his life. It appears Ivy will remain unconscious for a while, but she should pull through.

Stick with “The Bold and the Beautiful” for updates on this couple’s attempt to reconcile. So B&B fans, what do you think about the fact that Steffy has played a role in yet another horrific accident?

Will Thomas and Liam stay on Steffy’s case about what happened to Ivy? Will Wyatt and Ivy be able to work things out when she wakes up?