The Bold and the Beautiful (B&B) Spoilers: Quinn Steps Up for Wyatt, Spencer Fashions Nears – Steffy Won’t Budge on Ivy 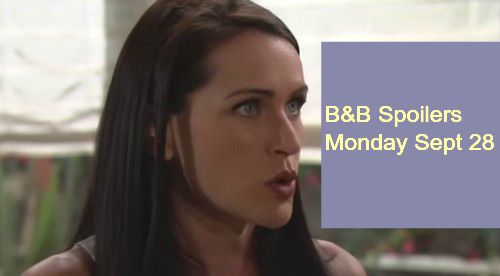 “The Bold and the Beautiful” spoilers for Monday, September 28, tease that Ivy (Ashley Brewer) is in for a rude awakening. Ivy thought she’d waltz right into Forrester Creations and grovel her way back into her position. However, Ivy should’ve known that Steffy (Jacqueline MacInnes Wood) wouldn’t go for that.

Steffy is on a mission to make Ivy’s life miserable and an apology isn’t going to change her mind after that video blackmail. When it comes to Steffy, she doesn’t do anything out of the kindness of her heart. If Ivy plans on working at her family’s company, she’ll probably have to fight fire with fire.

Fortunately, Ivy has Wyatt (Darin Brooks) on her side, which means Quinn (Rena Sofer) is joining “Team Ivy” as well. If you need to get sneaky and ruthless, Quinn’s your girl. Ivy and Quinn aren’t exactly gal pals, but they appear to have made peace with their tumultuous past, bridge and all. Besides, keeping Wyatt content is Quinn’s top priority. Quinn will do whatever it takes to please her pride and joy. Of course, Quinn often infuriates Wyatt in the process, but this is one time he might be glad she’s backing him up.

“The Bold and the Beautiful” spoilers say Quinn will make it clear that she’d go to great lengths for her son. Quinn will suggest that when it comes to Wyatt’s happiness, there’s no end to what she can do – and all B&B fans have seen this. Later on in the week, Quinn will take her beef to Bill (Don Diamont). No matter what Wyatt does, Liam (Scott Clifton) always seems to be Bill’s favorite. Quinn is sick and tired of Bill showing Wyatt he’s second best. B&B rumors hint that Quinn could cause big trouble if Bill doesn’t start treating Wyatt with some respect.

In the meantime, Bill will open up to Katie (Heather Tom) about the situation with his sons. Bill will indicate that he wishes they’d start acting more like brothers. Wyatt was disappointed when Bill turned down his fashion house idea, but Bill will insist it was nothing personal. Business is business. Bill will hope that Wyatt will understand down the road. Wyatt may come around eventually, but you can bet that Quinn won’t – is there a Spencer Fashions in the offing? Stick with “the Bold and the Beautiful” to see if this “mama bear” will bring on major changes.

So B&B fans, what do you think about the news that Steffy will stand her ground on Ivy’s firing? Is Steffy being unreasonable? Can Quinn convince Bill to make some updates to his attitude towards Wyatt and open Spencer Fashions? Does chaos lie ahead? Let us know what you think in the comments below and don’t forget to check CDL often for the latest “Bold and the Beautiful” spoilers, rumors, updates and news.

The Bold and the Beautiful video preview for Monday, September 28