BY Heather Hughes on May 22, 2015 | Comments: 2 comments
Related : Soap Opera, Spoiler, Television, The Bold and the Beautiful 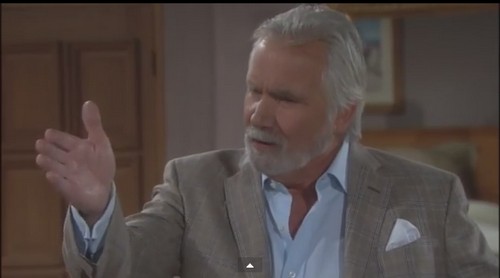 “The Bold and the Beautiful” spoilers for Friday, May 22, indicate that Rick’s (Jacob Young) job could be in jeopardy. Rick will try to convince Eric (John McCook) that Ridge (Thorsten Kaye) simply takes pleasure in being judgmental and condescending. However, it seems Eric is starting to come around to Ridge’s way of thinking. Eric will say he has a responsibility as the founder of Forrester Creations to change Rick’s course of action. Rick will try to protest, but Eric will remian intent on doing what he feels is best for the company. Will Eric force Rick out? Stay tuned to “The Bold and the Beautiful” to see if Eric will decide Rick needs to be taken down a notch.

Meanwhile, Nicole (Reign Edwards) will tell off Wyatt (Darin Brooks) for spilling Maya’s (Karla Mosley) secret. Nicole thought she could trust Wyatt, but she soon found out she was dead wrong. “The Bold and the Beautiful” spoilers reveal Nicole will say she knows Wyatt told Bill (Don Diamont) about Maya’s past. Nicole will add that Wyatt will have to find his next scoop somewhere else. It’s clear that Nicole wants to cut all ties with Wyatt, but he might have other ideas. Wyatt really started to care about Nicole by the end of his scheme. Unfortunately, it may be too little, too late. Nicole could forgive Wyatt eventually, but it’s going to be tough for her to ever trust him again.

Other “Bold and the Beautiful” spoilers tease that Caroline (Linsey Godfrey) will finally return and give Ridge updates what kept her away for so long. B&B rumors say Caroline will explain that an accident or illness was the reason she couldn’t leave New York. Ridge will be shocked, but there’s a good chance Caroline will be even more stunned when she hears what’s going on with Rick and Maya. Down-the-road spoilers hint that Caroline will support Rick, which is somewhat surprising considering how terrible he’s treated her. Nevertheless, it appears Rick will soon have Caroline on his side. There’s been some buzz that the writers might be setting up a Rick and Caroline reunion. That sounds like something that would be months away, but it’s still a possibility. Stick with the CBS soap to see who Caroline will end up with.

So B&B fans, what do you think about the news that Rick’s volatile behavior may cost him the CEO position at Forrester Creations? Will Nicole tell Wyatt to stay out of her life for good? Could Caroline’s decision to support Rick cause strife in her relationship with Ridge? Let us know what you think in the comments below and don’t forget to check CDL tomorrow for the latest “Bold and the Beautiful” spoilers, rumors, updates and news.

Watch The Bold and the Beautiful video spoilers for Friday May 22, 2015 and enjoy!