‘The Bold and the Beautiful’ Spoilers: Deacon Dumps Quinn For Brooke, Bill Not Happy To See His Ex?

BY Amanda Austin on January 28, 2015 | Comments: one comment
Related : Soap Opera, Spoiler, Television, The Bold and the Beautiful 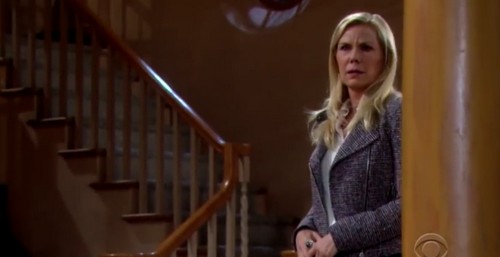 “The Bold and the Beautiful” spoilers for the episode of the CBS soap airing on Wednesday January 28 tease some must-see drama for B&B fans. Brooke Logan is back, and a lot has changed since she ran off to Milan. “Bold and the Beautiful” spoilers tease that on Wednesday’s episode Brooke sees Bill Spencer for the first time since she returned from Europe – and the old lovers have a lot of catching up to do.

“Bold and the Beautiful” spoilers tease that on January 28 Brooke is shocked when she learns from Bill Spencer that he has gotten back together her sister Katie, even though that is exactly what she told him to do before she left town. And, despite the fact that she has been away for months, Bill doesn’t exactly welcome her back with open arms. In the “Bold and the Beautiful” spoiler video for Wednesday’s episode, Brooke tries to reason with Bill and pleads, “I can understand your frustration with me and I probably could have handled this a better way.” While Brooke and Bill are bickering, Liam Spencer reassures Katie that everything is going to work out and promises her that “things are looking up.”

In other “Bold and the Beautiful” news, Katie apparently isn’t the only women on the CBS soap who is intimidated by Brooke Logan’s return to Los Angeles. For those of you who don’t remember, Bill and Deacon both proposed to Brooke before she skipped town. Quinn Fuller apparently is concerned Deacon is going to drop her like a bad habit and go running after Brooke again. In the “Bold and the Beautiful” spoiler video for tomorrow’s episode a concerned Quinn ask Deacon, “Bill and Katie are back together. So, where does that leave Brooke?”

Do you think that Brooke will try to get back together with Bill, and steal him from her sister Katie…again? Or will she set her sights on Deacon instead? Who should be more concerned, Quinn or Katie? Let us know what you think in the comments below and don’t forget to check CDL tomorrow for more “Bold and the Beautiful” spoilers and news.