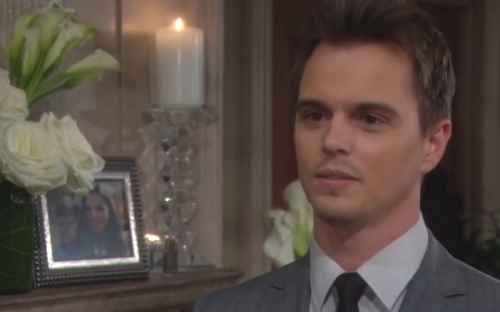 “The Bold and the Beautiful” spoilers for the episode of the CBS soap airing on Wednesday, February 18 tease some more exciting drama and emotional scenes as Bill and Katie’s (Heather Tom) wedding gets underway and they say “I Do” again. Rumors were floating around that Brooke Logan would cause a scene and interrupt her sister’s wedding this week on “Bold and the Beautiful.” But, according to Wednesday’s spoilers, Brooke manages to contain herself during the ceremony – she does act like an emotional, drunken wreck though.

The “Bold and the Beautiful” spoiler video for Wednesday, February 18 shows drunk Brooke sloshing champagne and nearly in tears. Katherine Kelly Lang’s character slurs to her sister Katie and ex-boyfriend Bill Spencer (Don Diamont), “This is going to be such a great year for you guys, it’s going to be a great year for me too.” Brooke is clearly not taking being single very well, and as predicted, she can’t seem to function without a man in her life.

“Bold and the Beautiful” spoilers also tease that on Wednesday, February 18 Quinn Fuller will continue to hound Deacon over his relationship with his baby-mama Brooke Logan. Quinn sees the writing on the wall, Ridge (Thorsten Kaye) and Bill are both unavailable, which means it is only a matter of time before Brooke tries to sink her claws into Deacon (Sean Kanan) and Quinn (Rena Sofer) is not happy about all of the time they have been spending together. In the sneak peek video of Wednesday’s episode of “Bold and the Beautiful,” Quinn scolds Deacon: “Maybe I am the one that should be jealous because obviously you have me confused with Brooke.” The all new “Bold and the Beautiful” promo also teases a clip of Wyatt Fuller (Darin Brooks) at the wedding gushing about the “power of forgiveness,” which is really interesting seeing as how he holds more grudges than anyone else on the CBS soap.

So, B&B fans, do you feel sorry for Brooke Logan or is she being over-dramatic? Will she be a woman of her word and not interfere with Katie and Bill’s marriage? Is Quinn Being paranoid, or is Brooke a threat to her relationship with Deacon? Let us know what you think in the comments below and don’t forget to check CDL tomorrow for more “Bold and the Beautiful” spoilers and news.