‘The Bold and the Beautiful’ Spoilers: Eric Slams Ridge, Prepares to Fight Dirty – Maya and Rick Talk Things Out

BY Heather Hughes on May 31, 2015 | Comments: 3 comments
Related : Soap Opera, Spoiler, Television, The Bold and the Beautiful 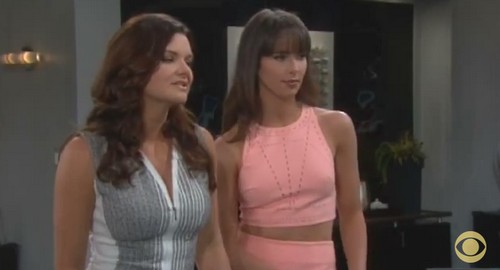 “The Bold and the Beautiful” spoilers for Monday June 1, 2015 tease that Rick (Jacob Young) and Maya (Karla Mosley) will finally have a chance to talk about everything that’s happened between them. Maya has been convinced that Rick doesn’t want her, but it’s really all a big misunderstanding. B&B rumors say this mess will soon be cleared up. Rick will plead his case and try to explain why he hung up on Maya after they left the cabin.

Maya will be concerned about the car accident, but she should probably be more worried about the impending crash of Rick’s career. Ridge (Thorsten Kaye) recently stood up to Eric (John McCook) and announced that he intends on taking control of Forrester Creations. Eric will undoubtedly express his disappointment in Ridge’s actions. “The Bold and the Beautiful” spoilers reveal Eric will deliver a low blow by saying he wishes Ridge was more like his mother. Ridge will likely indicate that Stephanie (Susan Flannery) is one of the reasons he wants to force Rick out. With Rick at the helm, the company is a sinking ship. If Ridge doesn’t do something drastic, he believes that his family’s legacy will be lost forever. Naturally, Eric won’t see Ridge’s point of view. Eric will feel that Ridge is undermining his authority and he’ll fight back in a big way.

Meanwhile, Bill (Don Diamont) will continue gloating at Spencer Publications. However, Katie (Heather Tom) is still a little ticked off about what Bill did to Maya. “The Bold and the Beautiful” spoilers say Katie will urge Bill to stop using Caroline (Linsey Godfrey) as an excuse for exposing Maya’s secret. Bill was concerned about how Rick was treating his niece, but that didn’t justify turning a private matter into a public mockery. Nevertheless, Bill would do it again in a heartbeat if he had to. One way or another, Rick had to go. Ironically, Bill could soon find himself standing up for the man he’s been trying to bring down. Eric will approach Bill will with some updates on the situation and he’ll have to consider an enticing offer. Stick with the CBS soap to see if a new alliance could change the game.

So B&B fans, what do you think about the news that Rick and Maya are trying to put the past behind them? Will they succeed? What about the battle that’s heating up between Eric and Ridge? Will Eric’s sneaky tactic cause Ridge’s scheme to fail miserably? Let us know what you think in the comments below and don’t forget to check CDL tomorrow for the latest “Bold and the Beautiful” spoilers, rumors, updates and news.