‘The Bold and the Beautiful’ Spoilers: Ivy Tells Liam Simple Plan – Aly Enraged After Meeting with Steffy and Maya 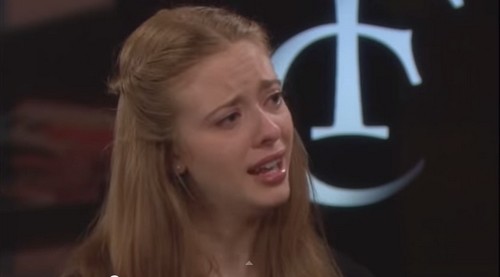 “The Bold and the Beautiful” spoilers for Tuesday, July 7, tease that Ivy (Ashleigh Brewer) will see Liam (Scott Clifton) and Steffy (Jacqueline MacInnes Wood) sharing a warm moment. When Ivy sees how close they’re getting, she’ll try a new strategy to keep Liam at least somewhat in her life. Ivy will acknowledge that it’s complicated right now, but she’ll have a way to simplify things a bit.

It sounds like Liam will officially have the freedom to date both Steffy and Ivy. Ivy doesn’t know it yet, but this idea is destined for failure. In an effort to avoid pushing Liam away, Ivy will just end up pushing him closer to Steffy. Fortunately, Wyatt (Darin Brooks) will continue to stand up for Ivy in the midst of all this. Whether Liam chooses her or not, it’s clear that Ivy has Wyatt’s attention. Wyatt has been focused on getting his chance with Steffy, but he might decide to make a few updates to his plan. Ivy will inevitably feel drawn to Wyatt if Liam leaves her out in the cold.

Meanwhile, Aly (Ashlyn Pearce) will have another one of her signature meltdowns. Now that Maya (Karla Mosley) is back as lead model, Aly won’t appreciate the direction she’s steering the company in. “The Bold and the Beautiful” spoilers reveal that Aly will stand her ground. Aly will say she won’t let Maya treat her like this and she won’t let her ruin the company. It seems Aly is getting more aggressive each time her views get shut down.

Of course, Aly’s aggression is primarily directed at Steffy. B&B spoilers say that Steffy will try to put a stop to Aly’s constant criticism. Steffy will suggest that Aly stop hating, live her own life and let everyone else live theirs. Naturally, this will only ignite Aly’s rage further. Steffy may think she’s dealing with an innocent girl, but Aly has a dark side that’s about to rear its ugly head. The rumors hint that Aly will soon put her revenge plot in motion. Stay tuned to “The Bold and the Beautiful” to see what sinister scheme Aly has in mind.

So B&B fans, what do you think about the news that Ivy will try to make peace with sharing Liam? Is Ivy basically handing Liam over to Steffy? Does Wyatt still have his eye on Steffy or is he starting to develop a crush on Ivy? Are Maya and Steffy inadvertently sending Aly over the edge? Let us know what you think in the comments below and don’t forget to check CDL tomorrow for the latest “Bold and the Beautiful” spoilers, rumors, updates and news.

Watch The Bold and the Beautiful video preview for Tuesday July 7 below!