The Bold and the Beautiful Spoilers: Rick and Maya Win, Eric Signs Papers – Ivy and Ridge Fail To Save Forrester Creations 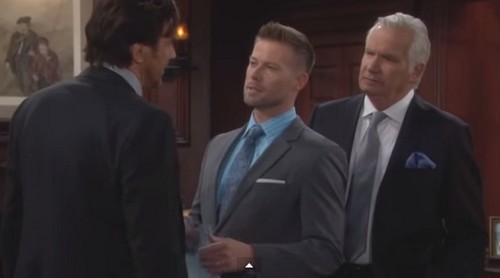 The Bold and the Beautiful spoilers tease that the Friday January 2 episode of the CBS soap will be an exciting one, and rumor has it B&B fans will not want to miss a single second of it! Rick and Maya have been scheming for months to take over Forrester Creations – and it looks like all of their hard work and deceit has finally paid off, and their evil plan will fall in to place on Friday’s episode of Bold and the Beautiful.

Ivy Forrester recently discovered that Rick and Maya were still hooking up behind Rick’s wife Caroline’s back and playing everyone. However, Rick blackmailed Ivy and told her that if she ratted them out she would lose her job at Forrester Creations. According to Bold and the Beautiful spoilers for Friday January 2, Ivy finally decides to ignore Rick’s warnings ad expose his and Maya’s affair. In the all new Bold and the Beautiful spoiler video for the January 2 episode Ivy confronts Othello and demands to know what Maya and Rick are up to. Ivy pleads with Othello, “If those two are planning something and something bad is going to happen, then you need to tell me.”

Unfortunately, it looks like Ivy Forrester is too late – because Bold and the Beautiful spoilers tease that on January 2 Eric Forrester finally gives in to Rick and signs complete control of Forrester Creations over to him. In the Bold and the Beautiful sneak peek video for Friday’s episode, Ridge learns that his father has signed their family company over to Rick. When Ridge arrives in the FC boardroom Rick reveals that he is “too late” and waves the papers that Eric signed in his face.

So B&B fans, are you shocked that Eric actually signed Forrester Creations over to Rick? What will Rick’s first order of business be – to fire Ridge and Caroline from the company? Now that the papers have been signed, will Rick kick his wife Caroline to the curb and go public with his relationship with his mistress Maya? Let us know what you think in the comments below and don’t forget to check CDL tomorrow for more Bold and the Beautiful spoilers and news.

Me too…..I refuse to believe that Rick & Maya will get by with it. arghh!

I hope they did too. Poor Thorne just keeps getting thrown to the curb, I like Ridge as he a designer but Thorne needs consideration. Rick is a manipulater and I don’t know why they make him that way.