‘The Bold and the Beautiful’ Spoilers: Quinn Gloats Over Wedding – Aly and Ivy Furious with Rick – Maya Suspicious of Nicole

BY Heather Hughes on March 7, 2015 | Comments: one comment
Related : Soap Opera, Spoiler, Television, The Bold and the Beautiful 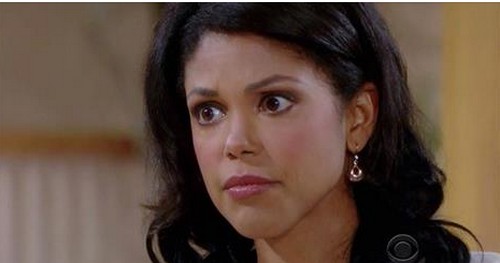 “The Bold and the Beautiful” spoilers for Monday, March 9, hint that Quinn (Rena Sofer) and Brooke (Katherine Kelly Lang) will be sparring once again. Those stubborn women just can’t seem to quit fighting over Deacon (Sean Kanan). It’s understandable that Brooke would have reservations about Deacon’s marriage to Quinn, but Brooke’s really bordering on obsession at this point. Then again, Quinn is the one who showed up at Brooke’s home for another brawl. Perhaps they both share a bit of blame in their constant cat fights. This time Quinn will take a few jabs as she gloats about her upcoming wedding. Whether you’re rooting for the shadow lurker or the “man predator,” check out the Monday, March 9 episode of B&B to find out who will win this round.

As things get heated for Quinn and Brooke, tensions will be running high at the Forrester mansion. Other “Bold and the Beautiful” spoilers tease that Aly (Ashlyn Pearce) and Ivy (Ashleigh Brewer) will have a discussion about Rick’s (Jacob Young) callous attitude. Now that Aly is being forced to give up her room, she’s had about enough of the self-professed head of the house. Ivy may try to persuade Aly to stand up for herself, but Aly will likely remain worried about her future at Forrester Creations. After all, Rick has the power to dash Aly’s career hopes in an instant. As much as she hates Rick’s harsh treatment, Aly will have to suck it up if she wants her shoe line to succeed.

Meanwhile, Maya (Karla Mosley) will try to get to the bottom of Nicole’s (Reign Edwards) strange behavior. Maya’s sister hasn’t been a part of her life for a long time. Why does Nicole suddenly want to be a part of it now? It’s tough to say, but perhaps Nicole has some career ambitions of her own. The rumors say Nicole will crash one of Maya’s photo shoots on an upcoming episode. Maybe Nicole is craving some of the attention that Rick showers Maya with. We don’t know for sure why Nicole has decided to get closer to Maya, but you can bet that her motives aren’t entirely pure. Stay tuned to “The Bold and the Beautiful” to watch Maya try to figure out what Nicole is up to.

So B&B fans, what do you think about the news that Quinn and Brooke will face off for what seems like thousandth time? Are you tired of their bickering or do you like the constant conflict? What will Aly and Ivy decide to do about Rick? Would you like to see Nicole give Maya a run for her money? Let us know what you think in the comments below and don’t forget to check CDL tomorrow for the latest “Bold and the Beautiful” spoilers, rumors and news.