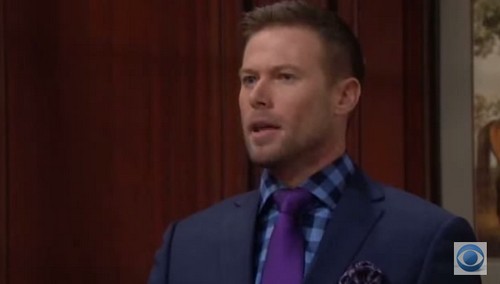 “The Bold and the Beautiful” spoilers for Monday, March 30, tease that Rick (Jacob Young) will once again stir up trouble at a staff meeting. Rick recently decided to put Quinn (Rena Sofer) back on the payroll at Forrester Creations. According to Rick, Quinn will be resuming her old duties and providing Ivy (Ashleigh Brewer) with creative direction. However, we all know it’s only a matter of time before Rick ditches Ivy completely. Rick isn’t fooling anyone and it should be crystal clear to Ivy that Rick plans on giving her the boot. Rick has treated Ivy like dirt for weeks, but this is sinking to an all-time low. After all, this is the same woman that threw Ivy in the Seine while they were in Paris.

Liam (Scott Clifton) probably won’t take the news well either. Quinn has meddled in Liam’s life more times than anyone can count. Bottom line, Quinn won’t have too many friends around the office. Nevertheless, whatever Rick says goes and it looks like Quinn will be back in action at Forrester Creations. Is Rick just trying to get under Liam and Ivy’s skin or does he have something else up his sleeve? Time will tell, but it looks like Rick’s updates could cause quite an uproar. Rick’s nastiness plus Quinn’s craziness sounds like a recipe for disaster.

While Quinn’s career might be looking up, her love life is certainly looking down. Deacon (Sean Kanan) may have proposed to Quinn, but it’s obvious his heart lies with Brooke (Katherine Kelly Lang). “The Bold and the Beautiful” spoilers indicate that Deacon will question Brooke about their chance for romance. Despite the fact that Deacon is apparently Brooke’s third choice, he seems to think that they really have something special.

This week’s B&B promo video shows that Brooke might feel the same way, at least now that Bill (Don Diamont) and Ridge (Thorsten Kaye) have turned her down. Get ready for another round of cat fights as Quinn and Brooke duke it out for Deacon’s love. Quinn has proven that she’s capable of anything so Brooke better watch her back. The rumors say things could get ugly. Stay tuned to “The Bold and the Beautiful” to see how Quinn will decide to settle the score.

So B&B fans, what do you think about the boardroom brawl that’s coming up? Will Rick’s hiring of Quinn be the last straw for Liam and Ivy? What about Deacon’s second chance with Brooke? Will Brooke end up breaking Deacon’s heart? Let us know what you think in the comments below and don’t forget to check CDL tomorrow for the latest “Bold and the Beautiful” spoilers, rumors, updates and news.