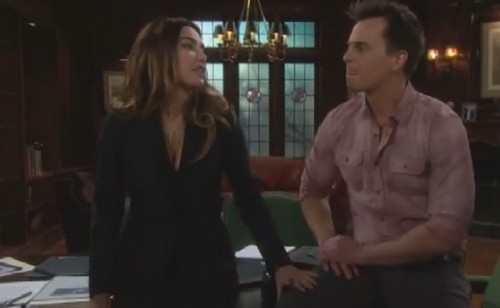 “The Bold and the Beautiful” spoilers for Monday, June 8, reveal that Ivy (Ashleigh) will finally be at peace with Steffy’s (Jacqueline MacInnes Wood) return to Los Angeles. Ivy was worried about Steffy making a move on Liam (Scott Clifton), but now she feels confident that Wyatt (Darin Brooks) will be able to keep Steffy occupied. Unfortunately, Ivy’s feeling of serenity won’t last long. “The Bold and the Beautiful” spoilers tease that Aly (Ashlyn Pearce) will share that she saw Steffy steal a kiss from Liam. Steffy’s actions won’t surprise Ivy, but the fact that Liam was a willing participant will be a bit of a shock. Of course, Liam will likely give the old “she kissed me” excuse. Does anyone ever buy that? In the end, Ivy will probably say she doesn’t care how it happened as long as it doesn’t happen again.

Meanwhile, Steffy will be preparing for a make-out session with yet another man. “The Bold and the Beautiful” spoilers indicate that Wyatt will take Ivy’s advice and begin pursuing Steffy. The pair will immediately start to bond over past relationships and wanting what they can’t have. However, Wyatt will suggest that Steffy try living in the moment for a change. Wyatt will imply that there’s a good thing right in front of them and it’s just waiting for them to grab it. B&B spoilers hint that Steffy will soon plant a smooch on Wyatt as well. At this rate, Forrester Creations should just set up a kissing booth and make Steffy’s skills profitable.

As if Steffy wasn’t busy enough with all the man juggling and the recent takeover, it seems she’ll add one more thing to her to-do list. Steffy will announce she’ll be taking on the role of lingerie model for the company’s new line. Just when Ivy thought things couldn’t get any worse, now she’ll have to watch Steffy parading around in something skimpy. Someone is bound to get turned on. The question is: who will it be? The rumors say we could have another brotherly love triangle on our hands. Liam and Wyatt spent months fighting over Hope (Kim Matula). It looks like round two could be fought over Steffy. Stay tuned to the CBS soap to see who Steffy’s summer fling will be with.

So B&B fans, what do you think about the news that Aly will blab about Steffy and Liam’s kiss? Did it mean anything? Will Steffy’s career updates make her even more attractive to Liam and Wyatt? Let us know what you think in the comments below and don’t forget to check CDL tomorrow for the latest “Bold and the Beautiful” spoilers, rumors, updates and news.

The Bold and the Beautiful video spoilers promo for Monday June 8, 2015