‘The Bold and the Beautiful’ Spoilers: Wyatt and Steffy Team Up in Boardroom and Bedroom – Quinn Back at Forrester 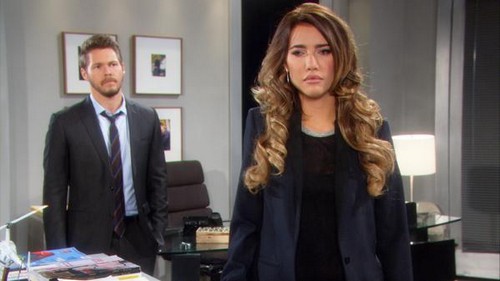 The Bold and the Beautiful spoilers provide more insight into the takeover attempts at Spencer Publications. Now that Steffy Forrester [Jacqueline MacInnes Wood] has returned from Paris, she is quickly learning how dysfunctional her family’s business has been since her cousin Rick Forrester [Jacob Young] took over the reins as CEO.

Rumors are flying about the next apparent power couple to dethrone Rick and mistress Maya Avant [Karla Mosley]. The B&B news is that Steffy will align with Wyatt Fuller Spencer [Darin Brooks] to gain control of Forrester Creations. After Steffy become aware of her former husband Liam’s [Scott Clifton] feelings for his new girlfriend Ivy Forrester [Ashleigh Brewer], who also happens to be her cousin she needed to find another ally. Steffy knows she still needs to remove Rick as CEO before he runs the family company into the ground even without Liam directly or romantically by her side. Steffy’s plan is to use Liam’s brother Wyatt, who is currently working at FC as a jewelry designer, to gain the much needed information on Rick’s next plan of action so she can pounce on him before he actually knows what’s happening.

The Bold and the Beautiful spoilers are also teasing about Quinn Fuller [Rena Sofer] making her grand entrance back to Forrester Creations with her son Wyatt’s help. Quinn was fired from FC a few months ago after her manipulations led to Ridge Forrester [Thorsten Kaye] being dropped/lost in the Persian Gulf. Now that Wyatt will be one of the head honchos at Forrester he will demand to bring his mother back on board as Head Jewelry Designer.

We are also hearing that Aly Forrester [Ashlyn Pearce] will finally get her shoe designs the much needed push and support from the new management. This apparently will start the next new exciting phase for Forrester Creations and a career boost to Aly‘s wonderful designs.

Spending a lot of time together planning and developing their strategies, BB rumors are also claiming Steffy and Wyatt realize they both have a lot in common starting with their ex spouses, Liam and Hope. Leaning on each other and gaining trust in one another, is making us think it won’t be long before Wyatt and Steffy take their own ‘Leap of Faith’ and fall madly in LOVE!

So what do you think, would you like to see Wyatt and Steffy as the next hot couple on the Bold and the Beautiful? How about Quinn regaining her position at Forrester? I’m sure this rehire will eventually start stirring things up at the office once again. And finally Yeah! for finally letting Aly Forrester get her foot in the door on the design floor. Come back often to CDL for more The Bold and the Beautiful spoilers.