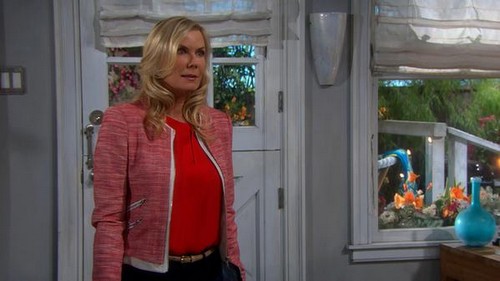 “The Bold and the Beautiful” spoilers and news for April 20-24 reveal a week of exciting drama at Forrester Creations, according to B&B rumors fans will not want to miss a single episode of the CBS soap. According to spoilers, it is time for Quinn (Rena Sofer) and Deacon’s big wedding day – but the odds of the couple getting married and living happily ever after are slim to none.

“Bold and the Beautiful” spoilers and casting news reveal that Kim Matula will make another appearance on Skype as Hope Logan. Just as Quinn and Deacon (Sean Kanan) are preparing to say “I Do.” Brooke Logan (Katherine Kelly Lang) crashes the wedding (shocker), with Hope on Skype. Through the video conference, Hope informs her father that if he marries Quinn, he can kiss his relationship with her goodbye.

In other “Bold and the Beautiful” news, spoilers tease that during the week of April 20, Wyatt Fuller (Darin Brooks) will turn on the charm, and use his good looks to try and wrestle Maya’s secret out of her little sister Nicole. Wyatt is working with Liam (Scott Clifton) to try and bring down Rick Forrester (Jacob Young), and when he overhears Nicole (Reign Edwards) and Maya discussing her secret he pounces at the opportunity. According to B&B spoilers, Wyatt invites Nicole back to his apartment and they share a hot kiss. But, Liam is concerned because he thinks that Wyatt is actually falling for Nicole and losing sight of their goal.

According to spoilers for the week of April 20, Rick Forrester is completely oblivious to the fact that Maya is keeping a huge secret from him and the Spencer brothers are plotting to take him down. He informs his parents Eric and Brooke that he plans to marry Maya (Karla Mosley). Meanwhile, Carter continues to pressure Maya to come clean about Myron.

So B&B fans, do you think that Deacon will choose Quinn over his daughter Hope? Will he cancel the wedding? Does Wyatt actually like Nicole, or is he just using her? Will Rick and Maya get married before he learns that she used to be Myron? Let us know what you think in the comments below and don’t forget to check CDL tomorrow for more “Bold and the Beautiful” spoilers and news.