The Bold and the Beautiful (B&B) Spoilers: Eric Learns the Truth of Steffy’s Involvement in Aly’s Death and Ivy’s Blackmail 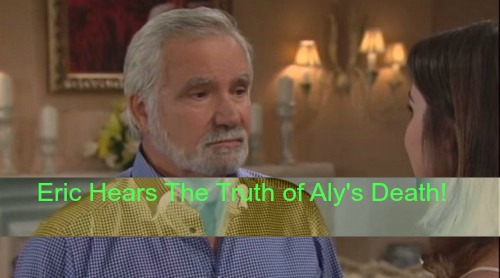 “The Bold and the Beautiful” spoilers tease that Steffy (Jacqueline MacInnes Wood) and Ivy (Ashleigh Brewer) will soon have another faceoff. Liam (Scott Clifton) and Wyatt (Darin Brooks) are clearly on opposite sides of this feud as well. It seems someone else will step in as a tiebreaker vote in who’s right and who’s wrong. “The Bold and the Beautiful” spoilers say Ivy will go to Eric (John McCook) and ask him to talk some sense into Steffy. Ivy is a Forrester just like Steffy is and she deserves to work in at the family company.

Eric will try to get to the bottom of what’s going on here, but he’ll sense that this is about more than Steffy’s trust issues. When Eric presses for answers, the whole ugly truth will finally come out. Steffy will come clean about what really happened the night Aly (Ashlyn Pearce) died and Ivy will admit she blackmailed Steffy with the cell phone video. Eric will probably understand both sides of the situation, but he won’t be too quick to offer a solution. Instead, Eric will encourage these quarreling cousins to work things out like reasonable adults.

Steffy won’t give Ivy her old job back and she certainly won’t let her resume her unearned position as the face of Forrester. That ship has sailed. However, Steffy will agree she might be willing to let Ivy return to the company in some capacity. We don’t know for sure what Ivy’s job will be, but we do know she won’t feel very comfortable doing it. Wyatt, on the other hand, will be absolutely delighted with Ivy’s new gig. Knowing Wyatt, that could mean Ivy is doing something that requires being scantily clad.

One of B&B’s sneak peek pics for this week shows a rack of skimpy dresses and lingerie in the background as Steffy and Ivy talk. Perhaps Ivy will be a lingerie model or help with fittings behind the scenes in some way. You can bet that Wyatt would love the chance to see Ivy wearing next to nothing in the workplace. Whatever Ivy ends up doing, it appears she’ll be back at Forrester Creations. Of course, Steffy will continue to walk all over Ivy as usual.

Ultimately, it looks like this battle is concluding in a draw. Nevertheless, Quinn (Rena Sofer) is obviously not happy with Liam and Steffy running the show. Just because Wyatt and Ivy are satisfied doesn’t mean Quinn will be. “The Bold and the Beautiful” rumors hint that Quinn could still have a trick or two up her sleeve. Stick with the CBS soap for updates on Quinn’s next move.

So B&B fans, what do you think about the news that Eric will hear all about the incriminating video and the blackmail scheme? Will Eric remain neutral on Steffy and Ivy’s fight? What will Ivy’s new position be? Could Quinn still stir up trouble? Let us know what you think in the comments below and don’t forget to check CDL often for the latest “Bold and the Beautiful” spoilers, rumors, updates and news.