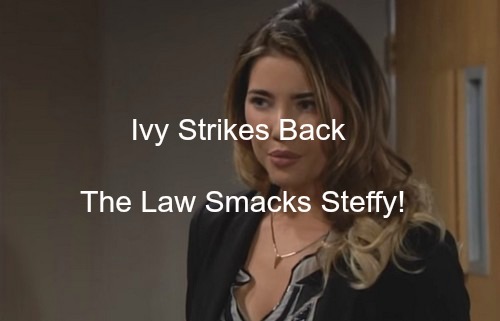 “The Bold and the Beautiful” spoilers for Friday, December 11, tease that Ridge (Thorsten Kaye) and Caroline (Linsey Godfrey) will make it clear that they’re not pleased with Thomas’ (Pierson Fode) recent behavior.

Ridge will point out that Thomas made a play for Ivy (Ashleigh Brewer) when he knew she was happy with Wyatt (Darin Brooks). It didn’t matter if Ivy liked it or not. When Thomas sees something he wants, he goes after it.

Of course, Ivy is just Thomas’ latest conquest. Thomas has already been called out by Ridge for taking an intern to bed. We can’t forget about Thomas’ hookup with Caroline, which resulted in her current pregnancy. Thomas claimed he didn’t know Caroline had taken pills, but it still wasn’t appropriate. It’s obvious that Thomas struggles to maintain the proper boundaries.

Meanwhile, Ivy will decide to stand up for herself. Steffy’s (Jacqueline MacInnes Wood) actions were way out of line and Ivy won’t think she can handle being around her. With that in mind, “The Bold and the Beautiful” spoilers say Ivy will file a restraining order against Steffy. It seems Ivy thinks that’s her only option if she expects to stay out of danger.

Unfortunately, Ivy will soon learn that even restraining orders can’t stop Steffy. Another confrontation is brewing that will leave Ivy injured once again. This rivalry is spiraling out of control. Between Ivy’s incidents and the ordeal with Aly (Ashlyn Pearce), Steffy could end up in deep legal trouble. That’s especially true if Steffy violates the restraining order next week.

Lieutenant Baker (Dan Martin) will start fishing for information and Steffy will have to answer some tough questions. We also have Liam (Scott Clifton) to consider. Liam finally agreed to let Steffy’s shove slide, but what about the next round of conflict?

There’s a chance that Liam won’t be as forgiving the second time. B&B viewers will be anxious to see if Liam will stand by his love when she continually puts Ivy in harm’s way. Stick with “The Bold and the Beautiful” for updates on the drama in their relationship.

So B&B fans, what do you think about the news that Ridge and Caroline will be outraged by Thomas’ pursuit of Ivy? Will Thomas try to defend his chase? What about the restraining order against Steffy and the fact that she’ll soon disregard it?

The Bold and the Beautiful Video Promo for Friday, December 11