The Bold and the Beautiful (B&B) Spoilers: Ivy Wants Liam Back, Sends Steffy to Jail? 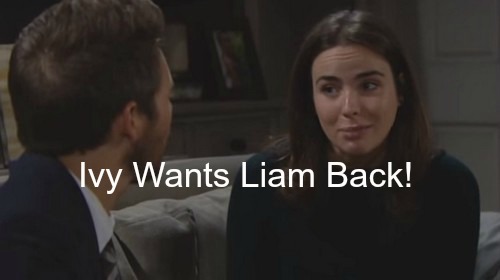 “The Bold and the Beautiful” (B&B) spoilers for Thursday, December 17, tease that Ivy (Ashleigh Brewer) will insist that rules are rules. Steffy (Jacqueline MacInnes Wood) seems to think she’s above the law, but Lt. Baker (Dan Martin) just announced that she was under arrest.

Is Steffy really headed to jail? Ivy might be convinced to give her a pass, but Steffy should steer clear if she expects to keep her freedom.

Liam (Scott Clifton) will tell Steffy that Ivy’s fear is getting the best of her. It’s leading Ivy to make some decisions that may be harmful to both of them, but Liam doesn’t intend to let it go on any longer. B&B spoilers say Liam will try to get to the root of the problem by having a deep discussion with Ivy.

Unfortunately, Ivy probably won’t be in the mood to put the past behind her. In fact, Ivy will reveal that her history with Liam still crosses her mind.

“The Bold and the Beautiful” spoilers say Ivy will ask if Liam ever wonders what could’ve been. Steffy waltzed back into Liam’s life and that was that. It didn’t take long for Liam to dump Ivy and move forward with his ex.

Ivy will inquire about what might’ve happened without Steffy’s interference. There’s a good chance that Ivy and Liam would be together right now if Steffy had stayed in Paris.

Nevertheless, their breakup may have been for the best. Liam and Ivy weren’t exactly in a loveless relationship, but it was arguably a boring one. They care about each other, but that doesn’t always translate to real sparks. Liam is happy with Steffy, but Ivy appears to be struggling with feelings for several men in her life. Perhaps Ivy just needs a little time to figure things out.

Meanwhile, Sasha (Felisha Cooper) will introduce herself to Maya (Karla Mosley). It should be easy for Maya to see that Sasha is a firecracker. Still, Maya will likely welcome Sasha with open arms. Any friend of Nicole’s (Reign Edwards) is a friend of Maya’s.

Will Sasha break the trust of the Avants down the road? We’ll have to wait and see, but Sasha obviously poses a threat. That’s especially true for Julius (Obba Babatunde). Stick with “The Bold and the Beautiful” for updates on Sasha’s next move.

So B&B fans, what do you think about the news that Ivy might have some lingering feelings for Liam? How will Liam react to Ivy’s thoughts on the matter? Will Ivy drop the charges against Steffy? What will be Maya’s first impression of Sasha?

The Bold and the Beautiful Video Promo for Thursday, December 17 2015