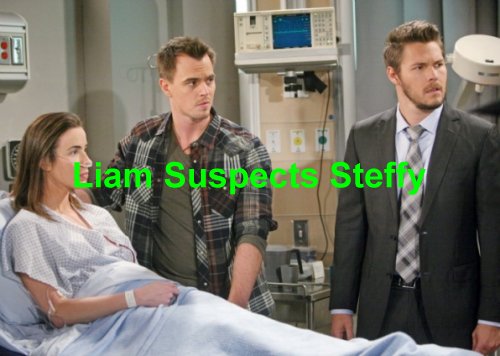 Of course, we saw that Steffy didn’t shove Ivy into the faltering electrical system, but she definitely didn’t warn Ivy and then let her get way too close to it. On a subconscious level, did Steffy let Ivy get close to danger in revenge?

Even if Steffy is 100% innocent in this (and maybe she’s closer to 50/50), it doesn’t look good. B&B spoilers tease that this incident provokes Liam to reconsider Steffy’s involvement in the death of Aly Forrester (Ashlyn Pearce).

Steffy was defending herself but since no one knows what went on between Steffy and Aly – up until Ivy showed up and started videotaping – there is no certainty that Steffy killed Aly in self-defense. What Liam does know is Steffy and Aly were rivals and Aly ended up dead.

And now Ivy and Steffy are rivals and Ivy was electrocuted and barely survived. It looks like a pattern of behavior, right? In a way, Liam is correct in his suspicions that Steffy wanted to destroy Ivy, but she wanted to do it emotionally, not physically.

Liam is already on edge with Steffy because she went to Wyatt Spencer (Darin Brooks) and blabbed the news of Ivy kissing Thomas Forrester (Pierson Fode) before Ivy could confess. Ivy had agreed to tell the truth, but Steffy just couldn’t stop herself from screwing Ivy over.

Liam was upset that Steffy did that after promising him she wouldn’t, so now he may be uncertain that he can trust what Steffy says about the Ivy electrocution incident. Just like with Aly’s death, there are no witnesses to vouch for Steffy.

“Bold and the Beautiful” spoilers tease that Ivy’s scrape with death will send Wyatt back to her side for a reunion and forgiveness of the kissing occurrence. Steffy will see her plan to split Wyatt and Ivy unravel, plus there may be further consequences.

Will Liam take back the ring because he can’t trust Steffy and thinks she’s lethal to her enemies? It’s one thing to be metaphorically cut-throat in business, but another to go knocking people off. Can Liam sleep at night beside Steffy when he thinks she’s a killer – or at the very least, a (wo)man-slaughterer?

Things will get much worse for Steffy by Friday – according to B&B spoilers, she’ll be slapped with a restraining order. Did Ivy go take out a protective order to keep Steffy away from her? Or was it Liam, Thomas or Wyatt that arranged for the no-contact order?

Will Steffy have to watch as all the men in their circle rally around Ivy to “protect” her from Steffy? Have Steffy’s antics finally pushed everyone away? And, finally, will the restraining order ban Steffy from Forrester Creations? How will she work?

What do you think B&B fans? Does Steffy deserve the karmic backlash that life is about to deliver? Whose side are you on – Ivy or Steffy? Should Liam call it off with Steffy over her shenanigans? Share your comments below.

Be sure to check back with CDL for more “Bold and the Beautiful” spoilers all week long.