The Bold and the Beautiful (B&B) Spoilers: Frightening Staircase Fall During Steffy and Ivy’s Fight – Liam Furious at Steffy 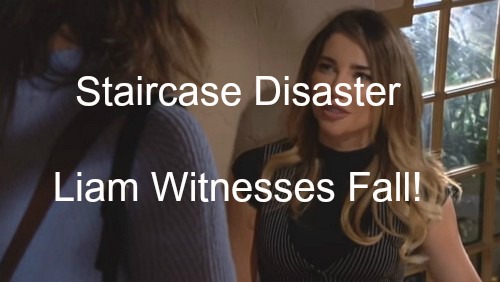 “The Bold and the Beautiful” spoilers for Thursday, December 31, tease that Steffy (Jacqueline MacInnes) will get fed up with all the trouble Ivy (Ashleigh Brewer) has been causing. Steffy just heard Liam (Scott Clifton) tell Ivy he loved her and that was the last straw.

After having an outburst at the office, Steffy will make her way over to the Forrester mansion to give Ivy an earful.

Steffy will find Ivy grabbing her luggage and getting ready to leave. They’ll argue on the staircase, which is a telltale sign that this won’t end well. Steffy and Ivy always seem to choose the most dangerous location possible for each of their altercations.

“The Bold and the Beautiful” spoilers say Steffy will bring up Ivy’s transgressions and urge her to go to Australia. Steffy will think they’ll all be better off when Ivy is out of their lives.

At some point during the confrontation, Ivy or Steffy will trip over a suitcase and fall down the stairs. We don’t know for sure which woman will fall, but Ivy looks poised to take another spill in the preview video.

Whatever happens, Liam will walk through the door right as one of them tumbles down the staircase.

Brooke has been bottling up her emotions and steering clear of Bill (Don Diamont) as much as she can. It appears that’s the only way Brooke has been able to cope.

Brooke thinks the idea of working at Spencer Publications is out of the question. “The Bold and the Beautiful” spoilers say Brooke will declare that she has to put what she had with Bill behind her. In Brooke’s opinion, there are really no other options.

Of course, B&B viewers know there’s at least one alternative. Bill could get back together with Brooke if old feelings start to creep in.

Naturally, that option would be completely devastating for Katie. Brooke will continue to pine while Bill considers her recent revelation. However, Katie will suspect that something’s up when she finds Brooke in tears.

It sounds like Brooke is going to get grilled. Stick with the CBS soap for updates on Brooke’s attempt to keep her love for Bill under wraps.

So B&B fans, what do you think about the news that Steffy and Ivy’s showdown will end with one Forrester plummeting down the staircase? What will Liam think about round three? Will Brooke tell Katie she’s still got the hots for her hubby?

The Bold and the Beautiful (B&B) Video Promo for Thursday, December 31 2015