The Bold and the Beautiful (B&B) Spoilers: Will Nicole Carry Rick and Maya’s Baby – Surrogacy Shocker! 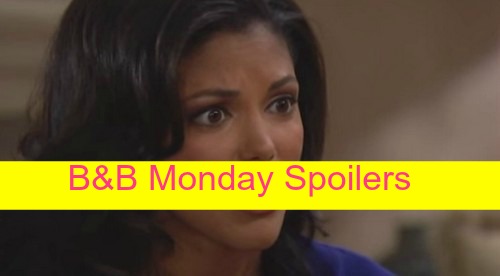 “The Bold and the Beautiful” spoilers for Monday, October 12, tease that Nicole (Reign Edwards) will take some time to think about Rick (Jacob Young) and Maya’s (Karla Mosley) shocking request. Maya just dropped a huge bomb on her sister by asking her to be their surrogate.

It seems Maya has her heart set on having a baby with both Forrester and Avant genes. Only Nicole can make that happen. Naturally, Nicole was a bit taken aback by the news that Rick and Maya want her to carry a baby for them. In fact the baby will be Nicole and Rick’s biologically, since only Nicole can provide an ovum, not Maya! You know if this goes through there will be oodles of soap drama coming up…

Nicole is young and she’s just getting started at Forrester Creations. Getting pregnant doesn’t exactly fit in Nicole’s career plan at the moment. However, Nicole loves Maya and she may seriously consider this idea.

“The Bold and the Beautiful” spoilers reveal that Nicole will open up about the recent development, presumably to Zende (Rome Flynn). You can bet that Zende will be surprised when he finds out what Nicole might do for her sister. In fact, Zende will start to realize that his goals for the future may not be in line with Nicole’s. Zende wants to have carefree, flirty fun and he probably doesn’t want to do it with a pregnant girlfriend. It sounds like Nicole and Zende will have a tough talk coming up.

Meanwhile, Bill (Don Diamont) will get updates on Steffy’s (Jacqueline MacInnes Wood) plot to get back at Ivy (Ashleigh Brewer). “The Bold and the Beautiful” spoilers say Bill will be quite pleased to hear that Steffy’s entertaining herself at Ivy’s expense. B&B viewers know that Bill is always up for scheming and he generally enjoys making other people’s lives miserable. Of course, Katie (Heather Tom) will try to intervene with these tricksters as usual.

Nevertheless, Steffy has no intention of letting Ivy off the hook. If Ivy wants to work at Forrester Creations, she’ll need to be a team player. That means parading around in as much lingerie as Steffy desires. Fortunately, the rumors hint that Ivy might be selling herself short when it comes to her ability to do this modeling job. Maybe Ivy will hit this out of the park and take Steffy by surprise. Stick with the CBS soap to see if Ivy will rise to the challenge.

So B&B fans, what do you think about Rick and Maya’s request? Will Nicole decide to be a surrogate or will Zende’s reservations deter her? Will Katie make Steffy feel guilty about her backhanded revenge scheme? Let us know what you think in the comments below and don’t forget to check CDL often for the latest “Bold and the Beautiful” spoilers, rumors, updates and news.