BY Heather Hughes on December 14, 2015 | Comments: one comment
Related : Soap Opera, Spoiler, Television, The Bold and the Beautiful 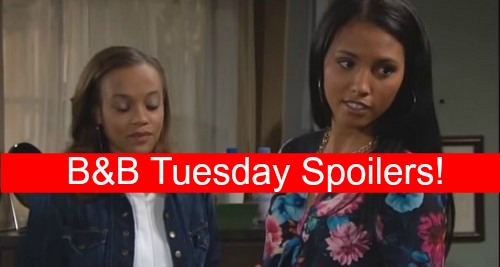 “The Bold and the Beautiful” spoilers for Tuesday, December 15, tease that Ivy (Ashleigh Brewer) will worry about what Steffy (Jacqueline MacInnes Wood) is capable of doing next. After everything that’s happened, Ivy has a right to be somewhat frightened.

Meanwhile, Steffy will let Liam (Scott Clifton) know that she doesn’t plan on giving into Ivy’s demands. Steffy will declare that she won’t let Ivy kick her out of her family’s company.

Ivy filed a restraining order, but it appears that’s nothing more than a piece of paper to Steffy. B&B spoilers reveal that Steffy will decide to meet with Ivy in hopes of weakening her wrath. Unfortunately, Ivy’s worst fear will come true once Steffy shows up at the beach house. The argument will take a perilous turn when Ivy falls and hits her head.

Other “Bold and the Beautiful” spoilers say Liam will try another tactic to sort things out between Steffy and Ivy. Since Wyatt (Darin Brooks) is such a strong influence in Ivy’s life, Liam will believe he can get through to her.

Liam will think there has to be a way to do this without making Steffy suffer unnecessarily. Wyatt will seem hesitant, but Liam will suggest that Ivy will reconsider if her boyfriend talks her into it.

Of course, it doesn’t look like Wyatt’s chat would make much difference now. Steffy just couldn’t stay away from Ivy and she’s about to pay the price. Ivy will soon call the police and let them handle this. Elsewhere, Julius (Obba Babatunde) will be dealing with an unwanted visitor of his own. Sasha (Felisha Cooper) recently blew into town and Julius is still furious about it.

Nicole (Reign Edwards) will give Sasha updates on the surrogacy and it could cause even more drama. Naturally, Sasha will realize that Julius isn’t on board and she’ll be happy to rub it in. Julius is particularly irked by Sasha’s presence and we know she has a secret.

Many viewers are speculating that Sasha could be a lovechild that Julius has swept under the rug. Could Maya (Karla Mosley) and Nicole have a sister they don’t know about? Stick with the “The Bold and the Beautiful” to see if Sasha can squeeze some benefits out of her arrangement with Julius.

So B&B fans, what do you think about the news that Liam will want Wyatt to change Ivy’s mind? Will they be stunned by Ivy’s next accident? What is Sasha hiding and what will the eventual revelation mean for the Avants? Let us know what you think in the comments below and don’t forget to check CDL often for the latest “Bold and the Beautiful” spoilers, updates and news.

The Bold and the Beautiful (B&B) Video Promo for Tuesday, December 15