‘The Bold and the Beautiful’ (B&B) Spoilers: Quinn Clashes with Ivy – Liam Orders Her to Back Down, Stop Video Madness 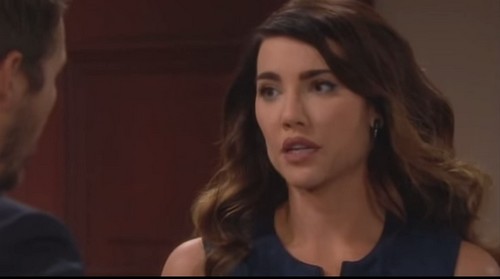 “The Bold and the Beautiful” spoilers reveal that Liam (Scott Clifton) will watch the incriminating video of Steffy (Jacqueline MacInnes Wood) and decide that there’s probably more to the story. As a result, Liam will take Steffy’s side and order Ivy (Ashleigh Brewer) to delete the footage or take it to the cops. There’s no point in hanging this over Steffy’s head forever. Liam will insist that Ivy needs to do what she has to do or she should just let it go.

Of course, that’s not what Ivy has in mind. When Ivy started this crusade against Steffy, she was focused on justice for Aly (Ashlyn Pearce). However, it seems Ivy has picked up an extra motive or two along the way. Now that Ivy has gotten a taste of power, she likes it—A LOT. Ivy has no intention of letting Steffy walk all over her once again. Instead, Ivy will likely keep her eye on the prize and continue her quest to become the new face of Forrester Creations.

It looks like Liam and Steffy won’t be the only obstacles Ivy encounters. “The Bold and the Beautiful” spoilers tease that Ivy will run into some trouble courtesy of Quinn (Rena Sofer). This was bound to happen sooner or later. Quinn and Ivy have an interesting history to say the least. B&B viewers will remember that Quinn pushed Ivy in the Seine to stop Liam from marrying Hope (Kim Matula) and give Wyatt (Darin Brooks) his chance. Fortunately, Ivy appears to have put the incident behind her and she’s not the pushover she used to be.

Quinn will be shocked by Ivy’s personality shift. Quite frankly, Quinn didn’t know Ivy had it in her. Ivy will talk some smack and Quinn will tell Wyatt she doesn’t appreciate his new girlfriend’s attitude. Wyatt will send them back to their corners and encourage them to get along. Ivy has big plans at the company and she could actually help Quinn out if she’ll play her cards right. The rumors hint that the scheme team could add another member somewhere down the road. Stick with “The Bold and the Beautiful” for updates on the devious plot to come.

So B&B fans, what do you think about the news that Liam will take Steffy’s side after viewing the video? Will Ivy ignore Liam’s demands and do what she wants? Will Quinn become join Ivy and Wyatt’s alliance at some point? Let us know what you think in the comments below and don’t forget to check CDL often for the latest “Bold and the Beautiful” spoilers, rumors, updates and news.