The Bold and the Beautiful (B&B) Spoilers: Brooke’s Blunder Blows It – Bill Warns Liam as Quinn Goes to War

BY Heather Hughes on September 29, 2015 | Comments: one comment
Related : Soap Opera, Spoiler, Television, The Bold and the Beautiful 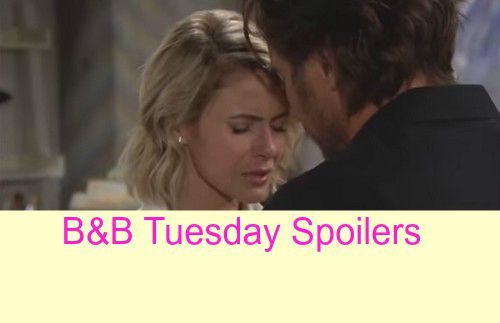 “The Bold and the Beautiful” spoilers for Tuesday, September 29, tell us that mistakes can be costly and moms can be dangerous! B&B teases that Liam (Scott Clifton) will realize he shouldn’t let his guard down when it comes to Quinn (Rena Sofer). It appears Quinn’s frustration is about to bubble over. Bill (Don Diamont) continues to show favoritism toward Liam and Quinn has had enough.

B&B spoilers say Quinn will point out that Wyatt (Darin Brooks) gets harsher treatment simply because he’s her son. Quinn will insist that Bill should stop holding that over Wyatt’s head. Of course, we all know Bill usually does what he wants. It’s doubtful he’s going to stop favoring his golden boy anytime soon.

Quinn will also pay Liam a visit to let him know she’s not pleased. However, Liam won’t approve of Quinn’s meddling. “The Bold and the Beautiful” spoilers say Liam will suggest that Quinn doesn’t need to micromanage every aspect of Wyatt’s life. That may be true, but it’s never stopped Quinn before and it’s not going to stop her now.

Elsewhere, Bill will open up to Katie (Heather Tom) about what Quinn might be up to. Quinn vowed that she’d do anything for Wyatt’s happiness and there’s no predicting how far she’ll go to prove it. Bill will admit that Quinn is a total nutjob and she’s capable of anything.

Meanwhile, Ridge (Thorsten Kaye) will try to comfort Caroline (Linsey Godfrey). Ridge just dropped the vasectomy bomb and he can tell Caroline is upset. Alas, Caroline’s tears aren’t entirely about the fact that Ridge can’t give her a child. The waterworks are flowing because Caroline already has a bun in the oven courtesy of Thomas (Pierson Fode). This is a difficult situation and it’s only going to get more difficult from here. The rumors hint that this romance is about to explode. Stay tuned to see Caroline come clean to Ridge later this week.

Brooke (Katherine Kelly Lang) will continue to be involved in Ridge and Caroline’s relationship. It seems Brooke will hear some news that catches her attention. Unfortunately, a misunderstanding could lead to trouble. It’s not clear what Brooke will learn, but this probably won’t end well.

Misunderstandings always create chaos on soaps. We should keep in mind that Brooke knows the truth about Ridge’s vasectomy. When she learns Caroline is pregnant, she’ll undoubtedly know there’s been a little hanky-panky going on. Stick with “The Bold and the Beautiful” for updates on Brooke’s next move.

So B&B fans, what do you think about Quinn’s mission to help Wyatt? Will Quinn’s plan succeed or will it backfire as usual? Will Brooke inadvertently make things even worse for Caroline? Let us know what you think in the comments below and don’t forget to check CDL often for the latest “Bold and the Beautiful” spoilers, rumors, updates and news.

The Bold and the Beautiful Video Preview for Tuesday, September 29