BY Heather Hughes on February 27, 2015 | Comments: one comment
Related : Soap Opera, Spoiler, Television, The Bold and the Beautiful 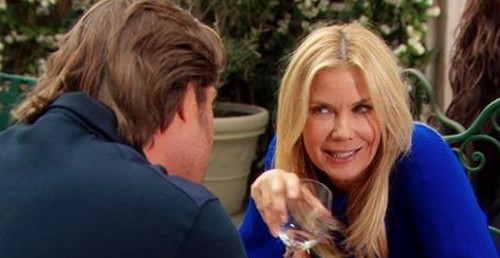 “The Bold and the Beautiful” spoilers for Friday, February 27, reveal that Quinn’s (Rena Sofer) concerns will grow after her conversation with Wyatt (Darin Brooks). Since Wyatt gave her an earful about her taste in men, it will have Quinn rethinking her current relationship. She’s already been worried about Brooke (Katherine Kelly Lang) swooping in to steal Deacon (Sean Kanan) away from her. Now the doubt will really start to get to Quinn. B&B spoilers for February 27 hint that she’ll seriously question whether Deacon is truly committed to her. Unfortunately for Quinn, it appears she’s about to get an answer to that question and it won’t be the one she had in mind.

After running into a very drunk Brooke, Deacon helped her home and thought that would be that. However, one thing led to another and Deacon now finds himself trying to resist her advances. “The Bold and the Beautiful” spoilers for February 27 hint that Deacon’s passionate moment with Brooke will have him wondering what to do next. Deacon wants to remain loyal to Quinn, but will he be able to fight his feelings for his former flame? We’ll have to wait and see, but word has it that Deacon’s guilt will lead him to spill the beans to Quinn in the near future.

Quinn won’t be too happy once she finds out went on behind her back. B&B viewers know just how crazy Quinn can get. Deacon’s lapse in loyalty will soon send her into a fiery rage. Some “Bold and the Beautiful” spoilers down the road tease that Brooke will badmouth Quinn to Deacon and the claws will come out. The forceful women will go head to head and things are sure to get interesting. Stick with CBS soap in the coming weeks to watch the sparks fly.

So B&B fans, what do you think about Quinn questioning Deacon’s commitment on the February 27 episode? Will Deacon’s passionate moment have him wondering if he’s made the right choice to be with Quinn? What about Brooke’s part in all of this? Was it really just a drunken mistake or did she know exactly what she was doing? Will she get her drinking under control or is she headed down a dark path? Let us know what you think in the comments below and don’t forget to check CDL tomorrow for the latest “Bold and the Beautiful” spoilers and news.