‘The Bold and the Beautiful’ (B&B) Spoilers: Fired Ivy Hauled Off by Security, Wyatt Freaks – Ridge and Caroline Profess Love

BY Heather Hughes on September 12, 2015 | Comments: 7 comments
Related : Soap Opera, Television, The Bold and the Beautiful 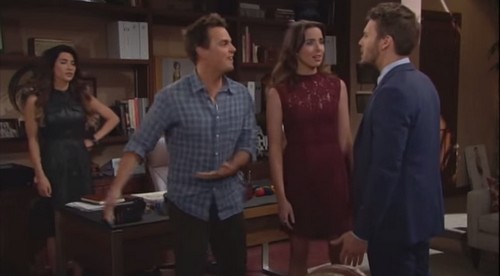 “The Bold and the Beautiful” spoilers for Monday, September 14, tease that Wyatt (Darin Brooks) will try to defend Ivy (Ashleigh Brewer). Steffy (Jacqueline MacInnes Wood) recently stunned everyone by taking back the modeling position and even flat-out firing Ivy. However, Ivy doesn’t think that’s fair and her boyfriend will back her up. Wyatt will tell Liam (Scott Clifton) that Ivy hasn’t done anything wrong and she doesn’t deserve to be treated like this. Liam will predictably take his girlfriend’s side and insist that Steffy has the authority to get rid of Ivy if she feels like it.

Just because Steffy can do something doesn’t mean she should. Nevertheless, Steffy usually gets what she wants and right now, she wants Ivy gone. “The Bold and the Beautiful” spoilers say Steffy will let Ivy know that she’s welcome to go anywhere else and do whatever she wants—as long as she leaves her out of it. Steffy will make it clear that she doesn’t want to see Ivy hanging around. In fact, Steffy will have Ivy escorted off the premises when she dares to complain. Ivy will be fuming as she’s hauled off by security. Steffy should be feeling pretty pleased with herself by the end of it all, but it might be a little early to celebrate her victory. B&B rumors hint that Wyatt will retaliate and Steffy won’t be happy with the plan he comes up with.

Meanwhile, Ridge (Thorsten Kaye) and Caroline (Linsey Godfrey) will get down to the business of becoming husband and wife, at least unofficially. “The Bold and the Beautiful” spoilers reveal that they’ll take each other’s hands in Malibu and profess their love. Ridge will suggest that he’s ready to be married to Caroline and navigate everything that comes their way. Caroline will echo that idea and declare that as long as they’re together, they can conquer anything. We’ll see if these two feel the same once the truth comes out about Ridge’s vasectomy and Caroline’s hookup with Thomas (Pierson Fode). Stick with the CBS soap to find out if secrets will ultimately mean more than vows.

So B&B fans, what do you think about the news that Wyatt will stand up for Ivy? Does Ivy really deserve to be fired? What about Ridge and Caroline’s love saga? Will their relationship come to a screeching halt when they get updates on big secrets? Let us know what you think in the comments below and don’t forget to check CDL often for the latest “Bold and the Beautiful” spoilers, rumors, updates and news.

The Bold and the Beautiful video preview for Monday, September 14