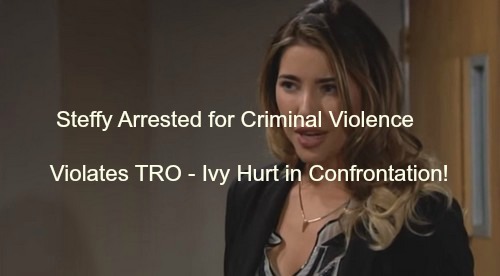 “The Bold and The Beautiful” (B&B) spoilers reveal that Steffy Forrester (Jacqueline MacInnes Wood) may be more of a danger than anyone realizes after another attack on Ivy Forrester (Ashleigh Brewer) that lands Steffy in handcuffs.

Steffy keeps insisting to Liam Spencer (Scott Clifton) and Wyatt Spencer (Darin Brooks) that she is blameless in the electrical shock incident that almost took Ivy’s life. But Steffy’s pattern of behavior will become more apparent after she hurts Ivy again.

No matter how much Steffy protests her innocence, the fact is, people who come into conflict with Steffy end up hurt (or dead). First there was Aly Forrester’s (Ashlyn Pearce) death, then Ivy’s near electrocution, and now a head trauma at Steffy’s hands.

Ivy took out a restraining order against Steffy which stated that, by law, she had to stay at least 100 yards from Ivy at all times. But entitled Steffy doesn’t think the law applies to her and decides to violate the protective order and confront Ivy.

Steffy demands that Ivy drop the TRO and that escalates into an argument and then (surprise!) Ivy takes a tumble and injures her head. Why can’t Steffy have a heated conversation without someone getting hurt? Perhaps Ivy is right to be afraid…

After Ivy is harmed by Steffy again, she calls the cops and Lieutenant Baker arrests Steffy – B&B spoilers indicate the incident took place at Forrester or Wyatt’s place then Steffy will be picked up by the cops at the home she shares with Liam.

Liam will be stunned to see his fiancée in cuffs and taken off to jail for her violent antics, but will this cause him to reconsider his stance of supporting Steffy? Will Liam finally begin to see the truth that Steffy has anger management issues?

Let’s face it – Steffy doesn’t handle confrontation well. She may not have the end goal in mind of hurting her rival Ivy (or her other nemesis Aly) but it sure ended up that way. That’s three violent incidents, one that ended in death, one near death and another near miss.

Steffy is clearly out of control and this won’t sit well with even-tempered Liam who will be shocked that Steffy violated the restraining order and put Ivy in harm’s way again. Liam should see that Steffy thinks she can do what she wants without consequences.

Steffy is wrong and Baker will be there to remind her the law also applies to heiresses, no matter what her spoiled self thinks. Will the family continue to stand behind Steffy or will their sympathies begin to shift towards Ivy after this second incident and arrest?

And if Steffy is barred from Forrester Creations while the TRO is in effect, is it time for Rick Forrester (Jacob Young) to make a move to push Steffy out as President? Can Rick (or someone else) make a play to oust Steffy because of her legal troubles?

What do you think B&B fans? Does Steffy deserve a time out in a 6×6 cell to ponder the error of her ways? Or should the court let her off with probation and about a 1000 hours of anger management sessions? Should the restraining order be made permanent?

Share your thoughts in the comments below and check back with CDL every day for more “The Bold and The Beautiful” spoilers, gossip and news.