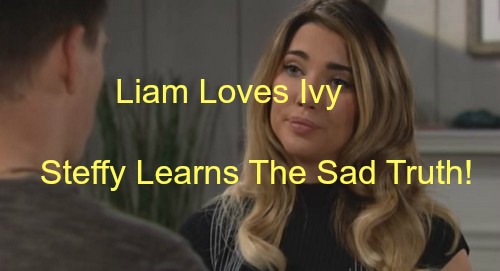 “The Bold and the Beautiful” spoilers for Wednesday, December 30, tease that Quinn (Rena Sofer) will try to comfort her son now that he knows the truth. Wyatt (Darin Brooks) was furious when he learned Ivy (Ashleigh Brewer) was still in love with Liam (Scott Clifton).

Once the anger begins to subside, Wyatt will be left with the heartbreak. Quinn will insist that Ivy was nothing but poison. In Quinn’s opinion, Wyatt is better off without Ivy in his life.

Steffy (Jacqueline MacInnes Wood) will also chime in on the issue. “The Bold and the Beautiful” spoilers say Steffy will suggest that Wyatt is too good for Ivy and he deserves better. Will Steffy end up being the one to take Ivy’s place? It’s possible. Liam is content with Steffy for now, but that could all change soon.

Ivy will share a weepy chat with Liam about everything that’s transpired. As tears fill her eyes, Ivy will ask Liam why he can’t admit that deep down he still loves her. Liam will surprise Ivy when he confesses that he does.

Unfortunately, Steffy will eavesdrop on their conversation and she’ll be outraged by what she hears. Ivy will declare that she’s moving back to Australia, but Steffy will plan on having one last rumble before she goes.

Meanwhile, Brooke (Katherine Kelly Lang) will tell Bill (Don Diamont) that seeing him every day just isn’t going to work for her. Brooke nearly took a drink after her meeting at Spencer Publications.

If Brooke had to interact with her former flame on a daily basis, she might start chugging vodka each night. Brooke will let Bill know that she can’t put herself through the pain of being around the man she can’t have.

B&B spoilers indicate that Bill and Brooke will reflect on their past. As memories surface, Brooke will lean in for a kiss. Bill is happy with Katie (Heather Tom), but it seems Brooke could cause some drama for this currently blissful couple.

Stick with “The Bold and the Beautiful” for updates on Bill and Katie’s bump in the road.

So B&B fans, what do you think about the news that Quinn and Steffy will claim Wyatt dodged a bullet? Will Liam’s love profession change the game? What about Brooke’s moment of vulnerability?

Does Bill secretly still have feelings for Brooke as well? Let us know what you think in the comments below and don’t forget to check CDL often for the latest “Bold and the Beautiful” spoilers, updates and news.

The Bold and the Beautiful (B&B) Video Promo for Wednesday, December 30, 2015