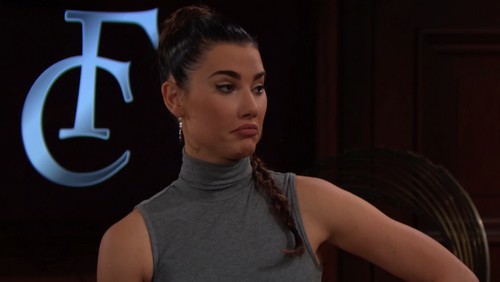 “The Bold and the Beautiful” spoilers reveal that Ivy (Ashleigh Brewer) will soon regret giving up all her power. For a while, Ivy really had it made. Thanks to the video she shot at the scene of Aly’s (Ashlyn Pearce) death, Ivy had enough evidence to possibly put Steffy (Jacqueline MacInnes Wood) in the slammer. Ivy could’ve held that video over Steffy’s head for the rest of her days. However, Wyatt (Darin Brooks) and Steffy convinced Ivy that deleting it was the right thing to do.

Steffy may not be a murderer, but that doesn’t mean she’s a nice person. When it comes down to it, Steffy looks out for number one. Now that the blackmail threat is finally gone, there’s nothing to keep Steffy in line. “The Bold and the Beautiful” spoilers say Steffy will devise a scheme to show Ivy who’s boss and take back the job she feels should be hers. In fact, things may turn out better than Steffy ever anticipated.

Steffy will make alternate plans for Ivy’s first photo shoot as the face of Forrester Creations. B&B rumors suggest that something will go horribly wrong. Perhaps Steffy will come up with a very challenging setting. Ivy might even have to do something potentially dangerous in order to capture the perfect poses and pics. We don’t know for sure what will occur, but we have to wonder if Steffy’s change of plans could result in Ivy’s injury.

“The Bold and the Beautiful” spoilers tease that whatever happens at the shoot will lead to a major obstacle for Ivy’s career. Let’s say Ivy falls and breaks her arm or badly sprains her wrist. Steffy could swoop in and take over. It’s doubtful that Steffy would actually intend on hurting Ivy (though you know she’s probably fantasized about it). Still, Steffy isn’t the kind of woman who would let a good opportunity pass her by.

We also know that Ivy’s misfortune will benefit Quinn (Rena Sofer). That would back up the hunch that Ivy could be somewhat out of commission for a while. If Ivy doesn’t have the use of both hands and arms, she’s going to have a hard time creating jewelry. Quinn has been critical of Ivy’s work lately and she undoubtedly thinks she should be the top dog of the jewelry line. Maybe Quinn will get her wish.

Of course, Steffy’s sabotage may not be as sinister as it sounds, but the idea of Ivy taking a tumble seems awfully tempting for a soap. It would certainly make for a doozy of a cliffhanger. Whatever the case, it’s clear that Steffy’s confidence is back and she’s not about to let Ivy push her around anymore. Nevertheless, Steffy should be on guard. With Wyatt’s help, Ivy may give Steffy a run for her money, is there a hidden copy of the video? Stick with the CBS soap for updates on the ruthless battle to come.

So B&B fans, what do you think about the news that Steffy will wreck Ivy’s photo shoot? Could Ivy get injured as a result of Steffy’s interference? Will Wyatt and Ivy take Steffy for everything she’s got? Let us know what you think in the comments below and don’t forget to check CDL often for the latest “Bold and the Beautiful” spoilers, rumors, updates and news.