The Bold and the Beautiful (B&B) Spoilers: Thomas and Wyatt Battle For Ivy’s Love After Electrocution Death Scare? 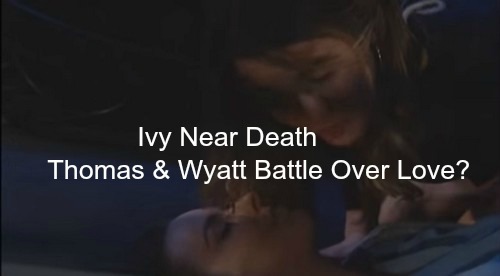 “The Bold and the Beautiful” (B&B) spoilers tease that Ivy Forrester (Ashleigh Brewer) will survive the “shocking” accident she suffered on Friday, December 4. Steffy Forrester (Jacqueline MacInnes Wood) will be able to revive her and get the paramedics there to help.

But this electrical event will send shock waves throughout Forrester Creations before all is said and done. Steffy was determined to make Ivy look like a cheating tramp in the eyes of Wyatt Spencer (Darin Brooks) – and it worked.

Wyatt was ready to walk away from Ivy over her suck-face antics with Thomas Forrester (Pierson Fode). But will Ivy’s death scare change his mind? Yep! Wyatt was already waffling a bit – that’s why he went back to the beach house to look for Ivy.

When he finds out she was near-fatally harmed – and that Steffy was possibly involved – Wyatt will rethink this whole chain of events. He will likely conclude that Steffy blew this all out of proportion and he needs to work things out with Ivy.

The idea of losing Ivy for good will soften Wyatt’s heart. Too bad that Thomas will be feeling similar emotions – is a war over Ivy brewing? Thomas was interested in Ivy for shallow reasons to begin with – she’s pretty, she was his sister Steffy’s rival, and she belonged to Wyatt.

But before this whole situation blew up, thanks to Steffy, Thomas was already beginning to have deeper and real feelings for Ivy. When he finds out that Ivy was hurt and Steffy may be complicit in the incident, Thomas will likely feel very protective towards Ivy.

The bottom line is, as Ivy lies recovering in her hospital bed, both Thomas and Wyatt’s feelings towards her will amp up – and the two may become outright rivals. Thomas was hiding his romantic overtures towards Ivy, but he may now go public.

Will Thomas go head to head with Wyatt and publicly fight for Ivy’s affections? And coming off of Wyatt’s rejection of her, then the violent incident she suffered, where will Ivy’s affections point? She may think Wyatt didn’t love her if he couldn’t forgive this minor indiscretion.

Plus, there’s the fact that Thomas was saying all the right things – and Ivy’s last recollection of Wyatt is him dumping her. Also, will Ivy come out of this incident clear-headed? Did the current from the server implosion fry her brain circuits?

Could Ivy wake up confused and erratic? Will she remember Wyatt breaking it off with her? Will she forget what transpired with Thomas? Could this accident affect her memory significantly and shake up her standing with both men?

Don’t miss a moment of the electrifying action on B&B and check back with CDL often for more “The Bold and the Beautiful” spoilers and news!

The Bold and the Beautiful Video Promo for Monday December 7