The Bold and the Beautiful (B&B) Spoilers: Thomas Desperate for More from Ivy – Steffy Rats Out Cheaters to Liam 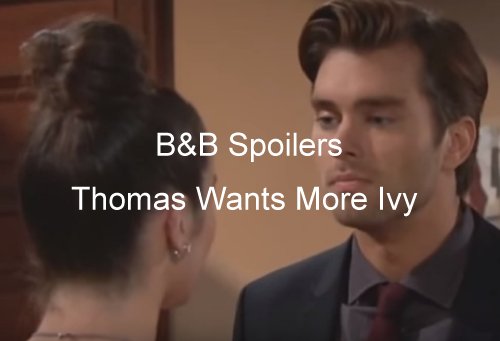 “The Bold and the Beautiful” (B&B) spoilers for Monday, November 30, tease that Thomas (Pierson Fode) will try a different tactic to make Ivy (Ashleigh Brewer) see things his way. Thomas will steal another moment alone with Ivy so he can make a desperate plea.

Ivy recently told Thomas that they should end this, but Thomas would rather take it to the next level instead. A frustrated Thomas will insist that he wants more than just a few minutes with Ivy whenever they get the chance.

Ivy is definitely attracted to Thomas, but it appears she’ll stand by her decision to cut Thomas out of the picture. Later, Wyatt (Darin Brooks) will make sure Thomas knows that it’s time to back off.

“The Bold and the Beautiful” spoilers say Wyatt will point out the trust he shares with Ivy. Wyatt will declare that they don’t keep secrets from each other. Ivy will undoubtedly squirm if she’s around to hear that statement.

It’s clear that Ivy needs to keep her intense make-out sessions under wraps. Unfortunately, that may not be possible. Steffy (Jacqueline MacInnes Wood) will overhear a portion of Thomas and Ivy’s conversation, which could cause trouble.

B&B spoilers reveal that Steffy will turn to Liam (Scott Clifton) with her cheating suspicions. Liam will suggest that Steffy is letting her history with Ivy cloud her view. It seems Liam just doesn’t think Ivy is that kind of girl.

Ivy has said repeatedly that she’s committed to Wyatt and Liam could struggle to believe she would waver from that commitment. Little does Liam know that Ivy has already been flirting with the idea of betrayal.

The news of what happened at the mansion that stormy night is destined to make the rounds. It looks like some of the details will come out soon. We could be dealing with broken hearts and raging tempers later in the week.

Will Steffy’s knowledge lead to the big revelations? Stick with “The Bold and the Beautiful” for updates on how things will heat up. So B&B fans, what do you think about Thomas’ appeal?

Will Ivy maintain that she simply can’t give Thomas what he wants? Will Wyatt’s statements about trust leave Ivy feeling guilty? Is Ivy’s secret about to blow up?

Let us know what you think in the comments below and don’t forget to check CDL often for the latest “The Bold and the Beautiful” spoilers, updates and news.