The Bold and the Beautiful (B&B) Spoilers: Thomas Gets Creepy With Ivy, Overhears Ridge and Caroline Discuss Baby Secret 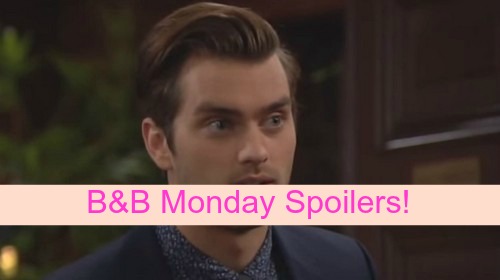 “The Bold and the Beautiful” spoilers for Monday, November 16, tease that Wyatt (Darin Brooks) will get fed up with all the flirting Thomas (Pierson Fode) has been doing around the office. Wyatt will suggest that Thomas thinks he can hit on every woman in the building just because he’s Ridge’s (Thorsten Kaye) son.

Wyatt will point out that Thomas is the “Playboy heir to the throne,” but he’s determined to make sure this successor stays away from Ivy (Ashleigh Brewer).

Unfortunately, Thomas has no intention of backing off. “The Bold and the Beautiful” spoilers reveal that Thomas will make another move. It seems Thomas will urge Ivy to try on a dress he designed with her in mind. Thomas will even start describing his fantasies about Ivy. For some reason, B&B writers keep pushing Thomas into creepy territory.

Ivy will make it clear that Thomas shouldn’t cross the line, but his quest will continue. Thomas will soon make a bet with Steffy (Jacqueline MacInnes Wood) about the object of his desire. It looks like Thomas is hoping Wyatt will be the real loser in this wager. However, Thomas will have something else to focus on first. Ridge and Caroline’s (Linsey Godfrey) secret will once again be at risk of exposure.

“The Bold and the Beautiful” spoilers say Ridge will assure Caroline they can raise this child and Thomas will never have to know the truth. Thomas will overhear the last few words of their conversation and it’ll put him on edge. Things will get tense when Thomas demands to know what his father and former flame are keeping from him.

Ridge and Caroline will probably manage to come up with an excuse, but it’s obvious that they’re not doing a very good job of keeping everything under wraps. For starters, they might want to stop rambling about their secret when the door is ajar.

The rumors hint that it won’t be long until Thomas discovers that Caroline is carrying his baby. Stay tuned to the CBS soap to see when Thomas will learn what Caroline and Ridge are hiding.

So B&B fans, what do you think about the news that Thomas will carry on with his pursuit of Ivy? How will Ridge and Caroline cover up their blunder? When will Thomas finally get updates on his son or daughter? Let us know what you think in the comments below and don’t forget to check CDL often for the latest “Bold and the Beautiful” spoilers, rumors, updates and news.

The Bold and the Beautiful (B&B) Video Promo for Monday, November 16