The Bold and the Beautiful (B&B) Spoilers: Wyatt Blows Up at Liam Over Ivy – Quinn Complains to Deacon – Ridge and Thomas War

BY Heather Hughes on September 30, 2015 | Comments: one comment
Related : Soap Opera, Spoiler, Television, The Bold and the Beautiful 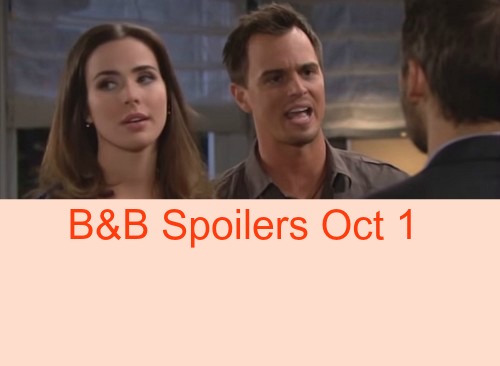 “The Bold and the Beautiful” spoilers for Thursday, October 1, tease family conflict, resentment and an outraged mom! B&B teases that Ridge (Thorsten Kaye) and Thomas (Pierson Fode) will have a major war of words. Ridge let Thomas know that taking interns to bed was not acceptable, but Thomas obviously disagreed. The tension reached a boiling point when Ridge called Thomas a spoiled brat who takes whatever he wants. Thomas threw a punch to make it perfectly clear how he feels about his father.

It looks like Thomas is dealing with some resentment issues. When you pair that with his jealousy over Ridge’s relationship with Caroline (Linsey Godfrey), it’s surprising that it took Thomas this long to deck his old man. Ridge will fire back with a tirade on “the great Thomas Forrester” and how he thinks he doesn’t need boundaries. By the end of it all, Ridge will declare that he’s not going to forget about this fight. It seems it’ll be a while before these two can sort things out.

Meanwhile, Wyatt (Darin Brooks) will lecture Liam (Scott Clifton) about the way he’s treated Ivy (Ashleigh Brewer). Wyatt will contend that Liam strung Ivy along when Steffy (Jacqueline MacInnes Wood) came strutting back into town and demanded another chance. Then, Liam broke up with Ivy at Aly’s (Ashlyn Pearce) memorial.

Since Aly was Ivy’s cousin and best friend, getting dumped undoubtedly made that day even more painful. Finally, Liam sat back and did nothing when Steffy fired Ivy from her own family’s company. Liam typically likes to play the hero, but his actions have been anything but heroic towards Ivy over the last few weeks.

Quinn (Rena Sofer) certainly doesn’t appreciate how Liam climbs to the top by stepping on everyone else. “The Bold and the Beautiful” spoilers say Quinn will have a chat with Deacon (Sean Kanan) about her feelings on the matter. Quinn will insist that Wyatt can’t keep being marginalized by Liam. Enough is enough. B&B rumors hint that Quinn’s not about to let this go. What could crazy Quinn have up her sleeve? Stick with “The Bold and the Beautiful” for updates on Quinn’s next big scheme.

So B&B fans, what do you think about Ridge and Thomas’ fight? When Caroline gives Ridge her pregnancy news, will it cause even more strife? What about Quinn’s vendetta against Liam for snubbing Wyatt? Will Quinn stir up trouble soon? Let us know what you think in the comments below and don’t forget to check CDL often for the latest “Bold and the Beautiful” spoilers, rumors, updates and news.

The Bold and the Beautiful (B&B) Video Preview for Thursday, October 1