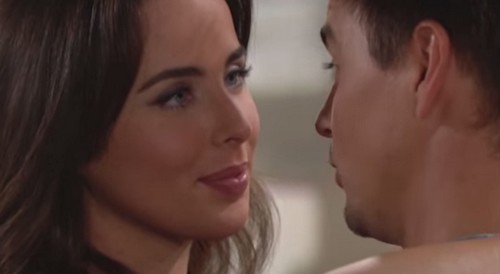 “The Bold and the Beautiful” spoilers for Wednesday, September 16, tease that Wyatt (Darin Brooks) will try to convince Bill (Don Diamont) that his plan will prove beneficial. Wyatt just pitched the idea of expanding Spencer Publications to include a design house. Their jewelry line could compete with Steffy (Jacqueline MacInnes Wood) and Liam (Scott Clifton) to take them down. Wyatt will suggest that Liam had to learn a lot about running a business before Bill made him the president of his company. However, Wyatt’s experience at Forrester Creations means he has the knowledge and he’s ready to go.

Bill will definitely take Wyatt’s plan into consideration. The thought of increasing Spencer Publications’ profit and one-upping Ridge (Thorsten Kaye) undoubtedly sounds appealing. Nevertheless, Bill may want to confirm he has all the facts straight first. “The Bold and the Beautiful” spoilers say Bill and Katie (Heather Tom) will soon head over to see Steffy and get to the bottom of this situation.

By the end of his pitch, Wyatt will be confident that his father will come around to his way of thinking. Wyatt will let Ivy (Ashleigh Brewer) know that Steffy and Liam made a huge mistake by underestimating them. Ivy is still furious about Steffy’s sudden decision to fire her, but Wyatt will assure her that she’ll get her revenge. Steffy is about to see what happens when you go one step too far.

Of course, Steffy has a plot of her own in mind. If Wyatt dares to retaliate, she plans on getting rid of him just as quick as she showed Ivy the door. Steffy claims that trust is major factor here. When Steffy can’t trust someone, she cuts that person loose. Steffy doesn’t realize she might be able to gain her employees’ trust if she’d stop stabbing them in the back. Unfortunately, that’s a lesson Steffy will probably never learn.

If all goes well with the Spencer Publications expansion, Wyatt may not even care about his job at Forrester Creations. Steffy’s threats don’t seem to scare Wyatt. B&B rumors hint that a battle is brewing and it’ll be a fight to the bitter end. Stay tuned to “The Bold and the Beautiful” to see which side will emerge victorious.

So B&B fans, what do you think about the news that Wyatt will finish pitching his big idea? Will Bill be on board with the updates to his company? What about Steffy’s threats against Wyatt? Will they even matter to Wyatt if everything goes according to plan? Let us know what you think in the comments below and don’t forget to check CDL often for the latest “Bold and the Beautiful” spoilers, rumors, updates and news.

The Bold and the Beautiful video preview for Wednesday, September 16