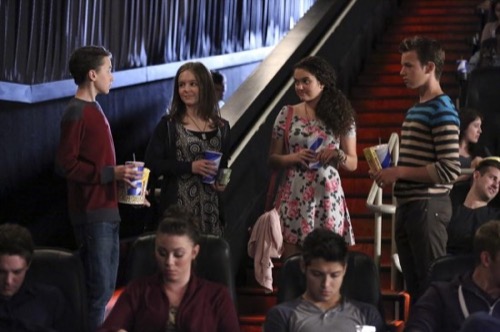 Tonight on ABC Family their hit drama The Fosters returns with an all new Monday February 9, season 2 episode 15 called “Light of Day,” and we have your weekly recap below. On tonight’s episode, Callie  [Maia Mitchell] tries a new approach with Robert. Meanwhile, Brandon [David Lambert] talks to the band about his mom’s rules; Ana’s situation inspires Mariana [Cierra Ramirez]; and Jude [Hayden Byerly] attempts to make peace with Connor.

On the last episode The Adams foster kids were not very excited to head out to the wilderness for a family camping trip, but Jesus shaked things up when he can no longer hold onto his secrets and got a surprise visit. Callie and Brandon awkwardly navigated their relationship while Jude got fed up with the way he’s being treated. Meanwhile, Mike asked Ana to move in with him. Did you watch the last episode? If you missed it we have a full and detailed recap right here for you.

On tonight’s episode as per the ABC Family Synopsis, “Callie decides to try a new tactic with Robert while Brandon aims to convince the band that his mom’s rules can work for everyone. News about Ana’s situation gives Mariana an idea that would affect the entire Adams Foster family. Meanwhile, Jude tries to make amends with Connor and agrees to go on a group date.”

We will be live blogging tonight’s episode at 9pm that airs on ABC Family. In the meantime, hit up our comments and tell us how excited you are for the return of The Fosters and enjoy a sneak peek of tonight’s episode below.

This thing between Mike and Anna is affecting everyone. But the known casualties are Stef and Mariana. Stef doesn’t want Ana in her children’s life and unfortunately Mike fails to grasp that as continues playhouse with a known drug addict. So Stef went behind his back and reported his actions to Mike’s sponsor.

Apparently, the other man hadn’t known Mike was risking his sobriety and so Stef took it upon herself to correct what she believed was a wrong. Mike however saw what Stef did as a betrayal. He felt Stef was sticking her nose in where she doesn’t belong and for that matter do did Lena.

Lena was tired of hearing Stef rant about Mike and Ana. And according to her, it only becomes their business when it’s hurtfully impacting their children. Though both moms fail to see how much Ana’s pregnancy is taking a toll out on Mariana.

Mariana hasn’t been herself since she heard the news and she’s basically taking her hurt out on everyone else. Including her boyfriend Matt who she broke with because suddenly she didn’t have time be serious about school and him.

Yet, Mariana wasn’t so serious about her studies as she let on when she skipped class in order to pay Ana a secret visit. It seems that Mariana finally had something to say but it wasn’t all pleasant. In fact the mother and daughter conversation was essentially Mariana telling Ana that she doesn’t have a maternal bone in her body. And that Ana would ruin this new baby just like she tried with Mariana.

So, no, their meeting was not a heartfelt lovefest. Nor did they fix all the issues that lie between them.

Though speaking to her biological mother about how she really feels just might get Mariana lay off of attacking everyone else. Because, sadly, Matt wasn’t her only victim. Mariana had also thrown her brother Brandon under the bus as well.

Brandon got permission from his parents to go on tour this summer and Mariana loudly stated he didn’t deserve it. She mentioned his fake IDs and told her parents Brandon didn’t deserve such freedom. So they put limitations on Brandon.

And those limitations just might get him kicked out of the band all together!

It appears the other band members don’t want to follow rules set down by Brandon’s parents. And why should they when their own parents come off as indifferent? So, rather than make sacrifices for Brandon, they’ve told Brandon that even if he didn’t come – they were still going on the road. And he didn’t really take that part so well.

The band including his girlfriend would not only be going out on an adventure without him, but they would also be singing his songs. You know the ones he wrote. And Brandon, the creative genius that he is, feels like they shouldn’t be allowed to do that because in his own words they would be nothing without him.

And as Brandon continues to whine about his super strict mom (seeing as it simply had to be Stef’s fault) – Callie is trying to deal with her father.

Like court ordered, she’s been meeting with him one day every week and this time they’ve even managed to find common ground. It seems photography runs in their family so Callie now has someone to talk to about her art. However this sweet moment was abruptly cut short when Robert, who can’ help himself, again reiterated to Callie that he wants to be her parent.

Yet. for a parent or wannabe parent that is, he doesn’t take his daughter’s feelings into account.

Callie is actually fine with having Robert in her life (she’s sort of made peace with it), but she already has a family and plus she couldn’t leave her brother Jude (the one struggling with his sexuality) behind. And that’s what Robert keeps asking her to do. So Callie told him that maybe he should try listening to her to find out what she wants instead of pushing things he wants onto her.

Though, funnily enough, Callie ended up giving Robert a firsthand account of what means to be a parent to a teenager life her.

Callie later found herself embroiled in a kidnapping thanks to a friend of hers and when the cops came to ask her questions – she called upon Robert to come and help. And like any good father would do – he showed up when she needed him. Meanwhile her other parents, Stef and Lena, were back at the house talking to Ana.

Ana it seems has gotten a wakeup call from her conversation with Mariana and now she wants to offer the couple the chance to adopt her new baby. That way Her unborn daughter could go to fit parents and Mariana and Jesus will get to know their sibling.

And as the couple is thinking about it, Mariana has gotten her life back together and Jesus has made amends to Emma. So, hopeful, this piece news from Ana is not going to be rocking the boat for either of them at this time.