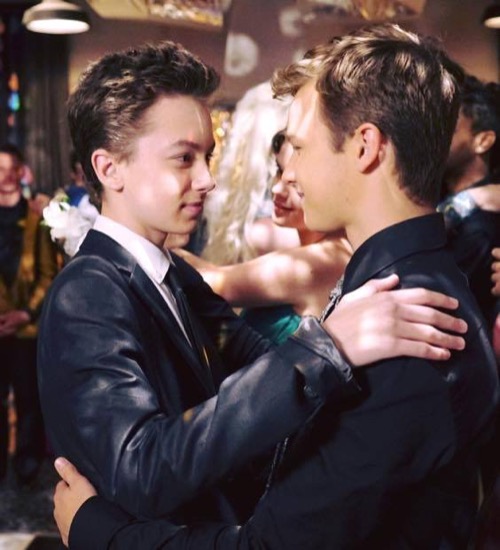 Tonight on ABC Family their hit drama The Fosters returns with an all new Monday June 29, season 3 episode 4 called “More Than Words,” and we have your weekly recap below. On tonight’s episode, Lena’s [Sherri Saum] estranged half brother visits, and she wants him to apologize to her mom for something he said many years ago. Meanwhile, Cole [Tom Phelan]  extends an invitation to a LGBTQ prom to Callie [Maia Mitchell], Jude [Hayden Byerly] and Connor. [Gavin MacIntosh]

On the last episode, when the family took a vested interest in AJ (guest star Tom Williamson, “Switched at Birth”), Callie had doubts about whether she could trust him. Stef surprises Lena with some news about Monte. Meanwhile, Jude had trouble moving on from the trauma of the shooting incident. Did you watch the last episode? If you missed it, we have a full and detailed recap right here for you.

On tonight’s episode as per the ABC Family Synopsis, “when Lena’s half-brother Nate (guest star Travis Schuldt, “It’s Always Sunny in Philadelphia”) comes for a visit with Lena and her parents, Lena aims to get an apology for an offensive name he called her mother years ago. Meanwhile, Cole invites Callie, Jude and Connor to an LGBTQ prom.”

AJ was caught putting Brandon’s one of a kind ball back but just because Callie cleared with her brother doesn’t mean Brandon is going to forget what AJ did anytime soon.

So on tonight’s all new episode of “Fosters” AJ has been made to walk a fine line. And he kind of stepped off it and too far to the right when he was later introduced to Callie’s friend Cole. Technically, AJ didn’t have a problem with a transgender teenager. But he might have voiced a little too loudly his shock when Cole took off his shirt and revealed he cut his former breasts off.

Thankfully, Callie can look past shock.

Although the only one that’s not willing to cross Callie, even while she’s in the best of moods, is Marianna. Marianna still hasn’t told her adopted sister about her one night stand with Wyatt. AFor the longest time it didn’t look like she wanted to get out of her own head to fess up.

Marianna is both ashamed about cheating on her boyfriend and hooking up with Callie’s ex. But it also looks like she can no longer hide from what happened. Matt came back for a short stay to surprise her and eventually he’s going to realize how much his girlfriend has been trying to avoid spending time alone with him.

Yet the dance the kids were going to couldn’t have come at a better time. It got Callie and Jude out of the house and it saved Lena from having to introduce them to her half-brother Nate.

Nate and Lena’s relationship is a tad tricky. Nate came from their father’s first marriage and Lena from his second. So growing up Nate made Lena’s mom feel like the other woman. He made it known that without her his parents would have still been together.

And one day Nate took his resentment too far. He said something that hurt both Lena and her mother, which ended up being intensified by the fact that Nate is white and the ladies are black.

When he as a teenager, he said the “N” word. It was after this when all parties realized they couldn’t play happy family. Even for their dad who was lucky enough to have never found out about what Nate said. So for the next few years, Nate cut off contact.

And yet now things are apparently different for him. For not only did Nate reach out to his father after years of silence but he also arrived at Lena’s home for dinner with his black girlfriend.

So Lena hit a breaking point. She felt like Nate’s girlfriend was a cover in order to prove he wasn’t a racist. And she didn’t like how her own mother was willing to dismiss his crime.

Nate called his stepmother the “N” word and Lena wanted an apology. She demanded one. She confronted him in front of their father and she got her mother to own up to what happened. But as for Nate, he still didn’t feel sorry. In fact, he reverted back to that little kid that felt abandoned the moment his father demanded his apologize.

As he was leaving, Nate told his dad that the other man always chose their side instead of his.

Meanwhile, at the dance Callie and Jude went to, they each ran into problems with their prom date. Callie had gone as Cole’s prom date to an LGBT prom; however, she’s not interested in Cole that way. So he was left hurt when his advances were turned down.

And Jude still refuses to label himself. So, eventually, Connor got tired of being part of a gay couple with a guy that won’t admit to being gay.

Jude had two choices. He could either admit to being gay or lose Connor. And he went with the confession because he truly does love that boy.

Then, after Callie and Cole had resolved their issues, everyone got back to having a great time. And later they didn’t even bother noticing the atmosphere when they finally returned home. For Callie and Jude, they had an awesome night. But for everyone else, it was heartbreak.

Lena’s father told her and his wife that he didn’t think he would ever forgive Nate. And so he lost a son in a single night.

And, instead of coming clean, Marianna chose to put the break on her relationship with Matt. Though that’s probably the worst thing she could have done. But her bro one-upped her on the stupid decision making.

Brandon did something truly stupid: He got kicked out of that prestigious summer program he attended for plagiarizing his “original” piece.