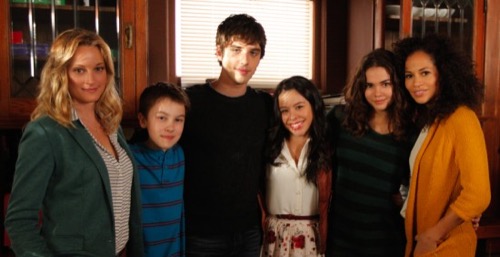 Tonight on ABC Family their hit drama The Fosters returns with an all new Monday August 3, season 3  Episode 8 called “Daughters,” and we have your weekly recap below. On tonight’s episode, Callie [Maia Mitchell views Rita [Rosie O’Donnell] differently after meeting Rita’s daughter, who has an uneasy bond with her mom.

On the last episode, Stef and Lena hesitated to give their blessing when Mariana’s biological grandfather told her she had to be baptized in order to be her new half-sister Isabella’s godmother. Callie’s actions at her birthday party are called out by Stef, and they made a big decision in order to avoid jeopardizing her adoption. Did you watch the last episode? If you missed it, we have a full and detailed recap right here for you.

On tonight’s episode as per the ABC Family Synopsis, “Callie views Rita differently after meeting Rita’s daughter, who has an uneasy bond with her mom. Elsewhere, Stef uncovers a new lead in the hit-and-run accident; and Brandon talks to his mothers about the tension he’s sensing in their home.”

We will be live blogging tonight’s episode at 9pm that airs on ABC Family. In the meantime, hit up our comments and tell us how excited you are for the next episode of the third season of The Fosters and enjoy a sneak peek of tonight’s episode below.

Tonight’s episode of “The Fosters” was all about mother& daughters. For it looks like both Stef and Rita have made pass decisions when it came to their children. And unfortunately it seems that their best intentions only ended up destroying what they were doing their best to preserve – their families.

See Stef had tried to keep Brandon and Callie. Especially when it became obvious that they had developed feelings for each other and were two crazy kids that believed themselves to be Romeo and Juliette reincarnated. And as their parent, Stef honestly thought the best possible way to keep her family away from borderline incest was to get a restraining order against her own son. You know so that it was actually punishable for Brandon to intentionally seek out Callie.

But no matter what she did, and unbeknownst to herself, that restraining order didn’t stop her kids. They continued to see each other even as Callie left to go live at Girls United. And that they also kissed each other when Callie first thought her biological father was going to take her away.

So, when the social worker, set up an interview with both parties – the two in question had no other choice. They had to lie!

Callie came up with a story that she believed would help her get returned to Stef and Lena (because she’s had to stay with Rita’s while this investigation is ongoing). And to be fair, her story was plausible. However it did not in fact match up with Brandon’s version.

He told the social worker that the relationship was mostly his fault and Callie said it was mostly hers. And then to top it off, they got the last time they were inappropriate with each other off. So what it really looked like was them protecting each other.

And if they did that then maybe they still have feelings for each other.

But that wasn’t the only thing on Brandon’s mind after his interview. Because as it turns out he asked the social worker about his parents’ foster license and she was the one that told him they were good for two years. And that’s when he realized his mothers had been lying to him.

Stef and Lena had originally said they couldn’t watch AJ with their license soon to be expiring. And now that Brandon knows that isn’t the case – he then figured out the truth. He knew his mothers were trying to keep Callie and AJ apart. So he lashed out at them and a part of it could be jealousy.

Brandon asked them why they never asked when they brought new kids home and why AJ gets a slap on the wrist meanwhile Stef had taken out a restraining order against him.

Though, while he was venting, Brandon probably never meant for Jude to hear him. Nor for his elder brother to refer to him as a “stray”. Something like that could affect their relationship.

Plus Jude heard Brandon say their parents were in couples’ therapy. Adding that maybe they should split up if they can’t stand to be alone with each other. And, well, Jude is a kid. He just didn’t know how to handle everything he heard.

Thus he too had a moment where he simply said “screw it all”.

Thankfully, Jude did eventually calm down but he later asked Callie when she was going to stop. She can’t keep ruining the good thing they have going for them.

And no one can tell her that better than Rita. Rita came to work for Girls United after she ran into problems with her own daughter. Chloe you see is bipolar. So at first Rita tried to help her adjust but as time went on – Chloe began ignoring her medication whenever she felt like it.

It made her feel better and it was also easier for Chloe to blame her mom for her dad committing suicide if she wasn’t thinking rationally. So those later had their own confrontation. And Rita ended up hitting her daughter.

Rita said she didn’t mean to but afterwards when she was accused of hitting one of the girls at the group home – she sadly had something of a history.