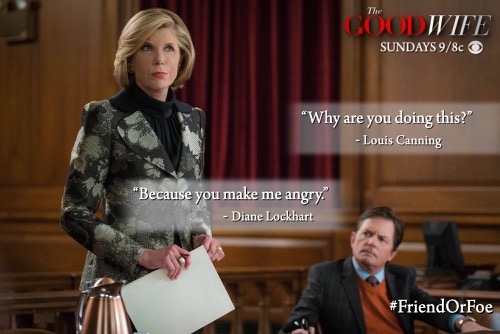 Tonight on CBS The Good Wife starring Julianna Margulies continues with an all new Sunday October 25, season 7 episode 4 called, “Taxed” and we have your weekly recap below. On tonight’s episode, Alicia (Julianna Margulies) clashes with a bond court judge when she agrees to support a client’s plea of innocence in a shoplifting case.

On the last episode, Alicia and Lucca worked together on a complicated case involving a designer drug dealer. Meanwhile, Eli persuaded Alicia and Veronica to take part in a mother-daughter cooking show to help Peter’s campaign, but things didn’t go as planned. Did you watch the last episode? If you missed it, we have a full and detailed recap right here for you.

On tonight’s episode as per the CBS synopsis, “Alicia clashes with a bond court judge when she agrees to support a client’s plea of innocence in a shoplifting case. Meanwhile, Diane is coerced into arguing against her own beliefs in a case focusing on physician-assisted suicide.”

Tonight’s season 7 episode 4 looks like it is going to be great and we’ll be updating it live for you beginning 9PM EST.

Tonight’s episode of “The Good Wife” kicks off in court, Canning is trying to get Alexis Banner’s video blog accepted in to evidence, she had a brain tumor and moved to Oregon for physician-assisted suicide. Alexis’s parents are apparently suing the doctor that helped her with her suicide. Diane is watching from the back of the court room, a man arrives and introduces himself as Ethan Carver. He informs Diane that Dr. Dipple wants her on the case, he is firing his lawyer. Diane argues that she is pro-euthanasia.

Meanwhile, Alicia is in bail court – she overhears a woman who was arrested for shoplifting. She says that she is not guilty – she was trying to return something and the store says that she didn’t pay for it. Her lawyer is trying to scare her in to pleading guilty. Alicia tells Maia that he isn’t being honest with her, Maia fires her lawyer and wants Alicia to represent her. The DA offers Maia a sweet deal, but Maia refuses to take it and pleads not guilty. The judge is furious that Alicia is once again stalling and slowing down his court cases. He takes away the rest of her cases and give them to the other bond lawyers for the day.

Cary calls Alicia for a meeting, he needs a favor – he wants her to convince Peter to veto a bill on physician assisted suicide. Cary says that if she gets the bill vetoed – they will bring her back to the firm, it was their client Dipple’s fault that they sent her packing. Dipple will happily have her back on the case at the firm if she gets the bill vetoed. Alicia turns Cary down, she says that she is happy at bond court.

Alicia heads home and her PI Crouse is waiting outside of her door, Alicia says that she has work for him. They meet with Maia’s mom – she swears that she bought the sweater for Maia for her birthday and she paid with cash. Maia’s mom says that the store is racist, and they make it hard for black people to shop there, and they are targeting Maia because of her race.

Eli overheard Cary and Alicia talking, he calls a secret meeting with Peter’s mom Jackie. He tells Jackie that Peter is going to be pressured to veto the bill on physician assisted suicide – Eli says that he thinks that Jackie should talk to Peter about it as his mother and make sure that he does the right thing. He warns her that Ruth will try to keep her away from Peter, but not to take “no” as an answer. Meanwhile, Diane is in court now going up against Canning and arguing on behalf of Alexis Banner’s parents. Aterwards, Canning meets with Diane and tries to cut a deal with her – Carver says that Dipple is not going to go with it until they drop the gag order.

Back in bond court, Alicia’s client Maia still refuses to plead. Alicia tells the judge that they will enter the plea after the store produces security camera footage and the SKU off from the sweater that she is being accused of stealing. The judge isn’t having it, he shouts at Maia that she has to plead guilty or go spend the night in jail and try again in the morning. Alicia rants that “this is blackmail” and Maia is marched off to a jail cell for the night.

Alicia’s PI Crouse heads to the store that Maia is being accused of shoplifting at, he calls Alicia and tells her that he thinks they have a racial profiling case on their hands. Meanwhile, Jackie is at Peter’s campaign office and trying to talk to her son. Ruth of course sidelines her and tells her that Peter is in a serious meeting. Diane is in court, arguing with the Doctor that helped assist Alexis Banner’s suicide. She points out that he knew about a new clinical trial that could potentially save Alexis, and he didn’t tell her about it before her death.

In bond court, Crouse tells Alicia that there is a security guard working at the department store that is singling out African American women. While they are talking another black girl is brought in for shoplifting at the department store. Her lawyer is trying to get her to plead out too, but Alicia interrupts again and hijacks the case and takes on Ms. Todd as a client too. Alicia puts Crouse on the stand to testify that he was at the store when Ms. Todd was and she didn’t steal anything. It turns out that

Crouse was disbarred 6 years ago for punching a judge, so his testimony isn’t exactly helping her case. Regardless, all of the other people that are waiting to go before the judge fire their lawyers and say that they all want Alicia to represent them because she seems to actually care about her clients and keeping them out of jail. Lucca and the other bond lawyers are furious with her because she is stealing all of the cases.

Jackie finally gets to see Peter – she wants Ruth Eastman fired because she was rude to her. While Jackie and Peter are disussing Ruth, his daughter Grace shows up and want to talk about physician assisted suicide too (apparently Eli paid her a visit also). Ruth knows that Eli is behind all of this – she whines to peter that he is sabotaging her. But, Peter doesn’t care who is responsible, he tells Ruth to just “take care of it.”

Crouse gets the security footage from the department store finally. Maia is innocent, but they realize that her mom actually stole the sweater a month earlier when she gave it to Maia for her birthday. Alicia is shocked – she shows the video to Maia. Maia doesn’t want her mother to get in to trouble so she finally agrees to plead guilty and take the deal that the DA has been offering her because she doesn’t want to see her mom get hauled in to jail.

It’s closing statements at Diane’s case, and Canning blows her arguments out of the water by sharing a message board about treatment for brain tumors – and Alexis commented on the article and said that it was “garbage” and wouldn’t work. Meanwhile at Peter’s office, Ruth meets with Eli and taunts him and thinks him for giving her a chance to meet Jackie and Grace. After court, Alicia heads out for drinks with Lucca. She tells Alicia that she is a horrible bond lawyer because she “cares too much.” But, she is going to have to “shake the trees” if she wants better paying cases. Alicia’s face lights up – she asks Alicia if she wants to do it together with her?