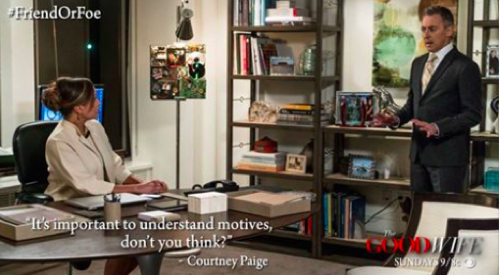 Tonight on CBS The Good Wife starring Julianna Margulies continues with an all new Sunday November 22, season 7 episode 8 called, “Restraint” and we have your weekly recap below. On tonight’s episode, Diane (Christine Baranski) becomes conflicted when she is forced to argue a heated case between pro-choice and pro-life advocates in order to retain an important client.

On the last episode, Alicia joined a case involving an automotive executive represented by Lockhart, Agos and Lee, and an employee represented by Louis Canning, who was involved in a crippling accident while test-driving a car operating in driverless mode. Meanwhile, Peter moved back in with Alicia to present a united family image in order to woo a potential campaign contributor. Did you watch the last episode? If you missed it, we have a full and detailed recap right here for you.

On tonight’s episode as per the CBS synopsis, “Diane becomes conflicted when she is forced to argue a heated case between pro-choice and pro-life advocates in order to retain an important client. Meanwhile, Alicia and Lucca, desperate for new business, try to poach clients from Louis Canning.”

Tonight’s season 7 episode 8 looks like it is going to be great and we’ll be updating it for you beginning 8 PM EST.

Tonight’s episode of The Good Wife kicks off with Diane watching a video of a nurse talking about preserving and packaging portions of fetuses after abortions. Her client got the video from the Bureau of Ethical Medicine, Dipple wants to sue the organization that the nurse is working for. Diane says that the only way it will work is if they can prove that a woman got an abortion and regretted it – and then they sold her fetus. He has brought along a file on a woman named Stacy Groom, she wants to sue the abortion clinic. Diane calls in Crause (Alicia’s PI), she tells him to vet Stacy.

Lucca meets up with Canning for lunch – he offers her a position at his firm. Lucca isn’t biting, she turns him down and says that she knows that the only reason he is trying to recruit her is because he wants Alicia. Meanwhile, at Alicia’s home office – they are pinching pennies and the business is in trouble. Grave volunteers to help and is calling all of the businesses in the phone book to see if they need legal representation. Alicia agrees to give her a percentage of any customers she lands.

Crause meets with Sarah Groom, she confirms that the nurse from the video (Hailey) is the one who gave her an abortion. Sarah says that Hailey flipped the baby in to a breech position to harvest the organs, and she never told her that they would be sold. Crouse takes Diane aside – he has crucial information on Sarah Groom. He gives Diane a form that Sarah signed giving consent to use her baby’s fetus, when Dipple learns he agrees to stop the lawsuit. But, he is leaking the abortion clinic video online. Later that day he returns to Diane’s office, he quotes her in a speech she made and convinces her that they shouldn’t let the baby fetus sales go without addressing them.

At Alicia’s office, Grace calls Eli and asks if he knows anyone who might need a lawyer. Eli rushes off the phone because Paige arrives at the office. He invites her into his tiny office, Eli says they need to talk about her business “The Salary Floor.” Eli thinks it was a bit strange that she gave all of her employees a $75K raise – they want her to wait until after the election because being in bed with a socialist is not good for Peter’s campaign.

Alicia meets with Courtney Paige, Eli referred her, she gives her the run-down on Eli. Courtney Paige has come to talk business though, she is concerned that some of her employees might sue her because of the salary floor. Some of the men that have been working for her company for 10 years might be upset that newbies are making the same amount of money as them.

Meanwhile in court, Diane takes a loss – the judge refuses to let them use the video of Fisher because she didn’t give anyone permission to record her.

Eli pays Alicia a visit at her office and he is not happy. Courtney’s husband is sueing her for breech in fiduciary duty – because of the raises, apparently he is still a share holder in the company. Alicia calls Crause for help, she tells him to look in to Courtney’s husband Larry Oliver. While, Alicia is on the phone with Crause – she hears Diane in the background, and she is not happy about it. Crause blows Alicia off and says that he will call her back.

Grace is still hard at work trying to find new clients for Alicia and Lucca, she finally gets through to the National Council Of Woman Rights. Coincidentally – they are actually in the process of looking for a new lawyer. The woman in charge is familiar with Alicia’s work, she tells Grace that they would love to work with her and to send over the necessary paperwork.

Lucca meets with Canning again, he offers her three huge clients if she joins his firm. Lucca checks out the files and then declines, she heads back to Alicia’s office and tells her that she has the clients’ names and info and they can meet with them tomorrow. Grace tries to tell her mom about the National Council of Woman Rights, and ALicia blows her off. She heads back to her bedroom and lands another HUGE client – The Justice Center.

Back in court, Diane tries another attempt – she argues that her client is a “whistle blower” and Groom was blowing the whistle on the abortion clinic because they were misrepresenting what they were using the state funds that they received for. The judge is fed up, he calls Diane in to his chambers and tells her that she needs to stop trying to make this case work and just give it up – it’s better for everybody if the tape never sees the light of day. The judge’s chat only infuriates Diane and she decides that she wants to put Stacy Groom on the witness stand.

Lucca and Alicia are botching their meetings with the clients that they are trying to steal from Canning. But, lucky for them Grace is home in her bedroom manning the phones and recruiting more clients all by herself. Meanwhile, Eli is awkwardly flirting with Courtney Paige in her office – they finally kiss for the first time.
At home, Alicia and Lucca learn that Grace landed four new clients for them, after they spent the entire day trying to poach clients – which didn’t work out. Alicia is shocked that she got The Justice Center and the NCW – apparently they weren’t happy working with Diane Lockhart anymore.

In court, Diane and the judge wind up fighting in front of the entire courtroom – she accuses the judge of being bias. He shouts at her that she is “out of line.” Diane informs Dipple that she is going to have to withdraw from the case because she just became a liability.

At Alicia’s office they are celebrating their new business, Grace takes her mom aside and informs her that she owes her $35,000 – that’s the percentage that they agreed on.