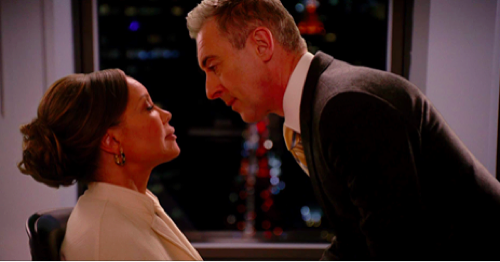 On the last episode, Diane became conflicted when she was forced to argue a heated case between pro-choice and pro-life advocates in order to retain an important client. Meanwhile, Alicia and Lucca, desperate for new business, tried to poach clients from Louis Canning. Did you watch the last episode? If you missed it, we have a full and detailed recap right here for you.

On tonight’s episode as per the CBS synopsis, “Alicia and Lucca join forces with Louis Canning (Michael J. Fox) to defend a website against an accusation of racial profiling. Also, Eli and Ruth worry about the nature of Alicia’s relationship with Jason and how it could impact Peter’s presidential campaign.”

Tonight’s season 7 episode 9 looks like it is going to be great and we’ll be updating it for you beginning 9:30 PM EST. In the meantime, sound off your comments and below and tell us how much you are enjoying this seventh season.

Tonight’s episode of ‘The Good Wife’ kicks off with Monica visiting Diane and Cary at the office. Monica is the law student that wore a hidden camera to her interviews with the partners at the firm – and then when she wasn’t hired she leaked the video online and made Cary and Diane and the rest of the partners look like racist bigots for not hiring her. Monica reveals that she needs their help – her friend’s company was just put out of business by a huge tech company and she is helping him sue them, but the case is way too much for her to handle on her own. The company she is suing is called Chumhum, and is known for being racist. Meanwhile, Alicia and Lucca are meeting with Canning, he is representing CHumhum and wants their help.

Monica takes Cary and Diane to meet her friend Feldman – she owned a restaurant, and was very successful – until CHumhum released their new app. The app features a map of the city, and has different areas color coded based on how dangerous they are. Apparently, her restaurant is in a “danger zone” – so when people are using the Chumhum map, it reroutes them so that they never drive or walk past the restaurant. Diane is baffled – she doesn’t understand what is so dangerous about the neighborhood.

Everyone heads to the depositions, Alicia argues that there is nothing racist about Chumhum. The owner Harmon offers to pay Feldman $50,000 to open a new restaurant somewhere else, not in a red zone. Monica scoffs that his offer is a slap in the face, Chumhum is worth over $300 Billion, it looks like they are going to trial.

Alicia heads home to film some campaign commercials for Ruth. Jason arrives and interrupts, they have a chat about him working for Diane as freelance – Alicia reassures him that it is fine, she doesn’t want to lose him. He gives her a smoking gun to use in court tomorrow against Cary and Diane. Meanwhile, Ruth watches them talking – she realizes that they are more than “just friends.” Ruth heads back to the office, she questions Eli and demands to know if Alicia and Crause are having an affair, she is furious that Alicia was flirting with him I front of the whole crew. Eli agrees to look in to it – Ruth is furious that Eli didn’t even know about this until now. Afterwards, Eli pays Jason a visit and they have an awkward conversation about his intentions with Alicia – he threatens Jason and reminds him that her husband is running for president.

In court the next day, Harmon takes the stand – Diane argues that over 70% of Chumhum users are white, so the results are skewed. Harmon insists that they don’t cater to Caucasian users. The judge seems to be taking Diane’s side – he dismisses Alicia’s request to deny the lawsuit.
Alicia, Lucca, and Jason get to work pouring through hundreds of emails from Chumhum to make sure that the company can’t be linked to anything racist. Alicia finds an email about using homeownership stats to determine which neighborhoods were unsafe. That can easily be twisted in to making all of the dangerous zones only in poor neighborhoods. Alicia and Lucca head to the Chummy Map office to speak to the designer of the app, he says that they never actually used the homeownership stats, they never made it out of beta.

Alicia gets out of court and Eli is waiting for her, he quizzes her about her relationship with Jason. They wind up arguing over her privacy. She snarkily reassures Eli that WHEN she sleeps with Jason she will be sure to keep it quiet.

Eli tells Nora that he has a mission for her – then she heads to Alicia’s house. She tells Alicia that the campaign sent her to see if there was anything that she needed, Nora barges in to Alicia’s hosue and says she will be sitting in the corner if she needs anything.

Cary calls Lucca in to his office, he tells her that one of the Chumhum coders – Kid O’Neil was mugged in 2013 right before he created the map, they think that he may be racially driven. Lucca tells Cary not to call her again, then she calls Alicia and warns her that they might have a problem. They need to find out whether the people that mugged Kip were white or black – Alicia says that she is going to get Jason on it ASAP. Jason learns that Kip’s post on social media about being mugged was just a joke – and there is another problem, Kip and his friends were also emailing each other black jokes through the company email. Kip reassures Alicia that he is not racist, and they were just immature fratboys back then.

Ruth is still hounding Eli about Alicia and Jason. She gives Eli a file and says that it is full of Jason’s skeletons, she wants Eli to show it to Alicia to scare her off so that she will stop seeing him. Eli takes the file and gives it to Jason – it turns out that Jason has been running searches on Alicia. He demands to know why Eli has been investigating her, he thinks that working for Alicia is all just a rouse.

In court, Diane and Cary find photos on the Chumhum photo tagging app that tagged a black woman as an African American. The judge demands to know why Alicia didn’t include the photos in discovery (she didn’t because Canning wouldn’t let her). The judge fines Alicia $5,000 for contempt, and orders her to hand over all necessary files for the case and to stop playing games and trying to bury Cary and Diane with paperwork.

Alicia and Lucca meet with Diane and Cary and their clients – they found documents that Mrs. Feldman had stored on the Chumhum Cloud regarding her website. Apparently, business had dropped months before the Chumhum app had even come out, and Feldman had cut her prices in half to try and keep her business going. With that smoking gun, Feldman has no choice but to take the $50,000 offer, she has no case. Afterwards, Cary invites Lucca out for a date – they head to a bar for drinks.

Eli shows up at Alicia’s door, he tells her that Jason has been investigating her and even has a file on her – she slams the door in his face.