BY Amanda Austin on May 3, 2015 | Comments: one comment
Related : Recap, Television, The Good Wife, TV 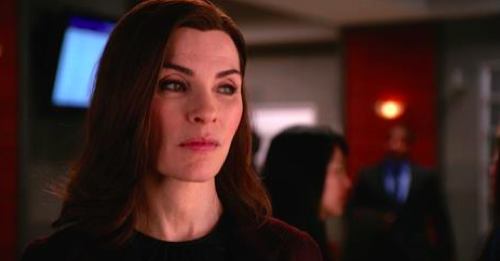 Tonight on CBS The Good Wife starring Julianna Margulies continues with an all new Sunday May 3, season 6 episode 21 called, “Don’t Fail” and we have your weekly recap below. On tonight’s episode, Alicia [Julianna Margulies] recalls her earlier days as a lawyer when a former client calls her after being charged with a murder that is tied to a case from 2009.

On the last episode, Alicia faced an uncertain future when she is forced to resign as State’s Attorney in the wake of a voter fraud scandal. Also, R.D. (Oliver Platt) hired Diane and Cary to argue against two ultra-conservative lawyers for a test case involving mandatory minimum sentencing. Did you watch the last episode? If you missed it, we have a full and detailed recap right here for you.

On tonight’s episode as per the CBS synopsis, “when a former client (Dorian Missick)calls Alicia after being charged with murder tied to a case from 2009, Alicia reviews the old case, prompting memories of her early days as a lawyer.”

Tonight’s season 6 episode 21 looks like it is going to be great and we’ll be updating it live for you beginning 9PM EST.

Tonight’s episode of The Good Wife kicks off with Alicia sitting down with a writer – he wants some names of her friends so that he can interview them for her memoir, he is a her ghost writer. Elizabeth can’t think of any friends, so he moves on to the next topic – Will Gardner. While they are talking Elizabeth keeps receiving phone calls from sales men and organizations asking her to donate money. After her meeting with her ghost-writer Alicia begins cleaning her already clean house from top to bottom, she is clearly bored out of her mind without a job. She stares at the clock and waits for it to be 5:00 so that she can have a glass of wine.

Alicia finds a package outside of her door from Eli – he left her a list of all of the campaign donors that gave her money, she has to call the and thank them for their money even though she was forced to resign. One of the men that she calls, named Brett Tatro says that he has been waiting for her phone call. Brett explains that she represented him when he was tried for attempted murder and got him acquitted. Brett explains that the guy that he punched just died so now they are charging him with murder – he has to go to court tomorrow. He begs Alicia to represent him – she tries to explain that she isn’t taking cases but she says she will find someone else to represent him.

Alicia puts on a hat and heads to a bar and meets up with Fynn, she explains the case to him and asks him to take it on – he declines and says he is swamped at work. Fynn doesn’t understand why Alicia won’t just take the case herself – she already knows it. Alicia explains that she is still embarrassed about the election and she thinks that everyone is staring at her. Fynn tells her that she needs to stop thinking about herself and think about Brett. She whines that she can’t take another failure.

The next morning Alicia heads to court and sits in on Brett’s case – Brett’s lawyer is stuttering and obviously unexperienced. She tries to argue double jeopardy, the judge tells her that they are going ahead to trial because they are completely different crimes. Brett was tried for attempted murder, not murder. After court Alicia meets with Brett and his wife, the state’s attorney taunts her after court and tells her that there is a hole in Brett’s case and it isn’t going to be as easy for her to win as it was last time.

Alicia calls Cary and tells her that she is taking on Brett’s case – she is concerned about the alleged hole in the case. Cary reassures her that she is going to do fine, and if there is a hole then it is in her notes, she took notes on everything back then. Alicia heads home and takes out boxes and boxes of notes – she begins plastering her livingroom wall with crime scene photos and listens to her recordings. She originally took on Brett’s case as pro bono, in the recording Brett explains that he met Jeff Garretts at a club and he was arrested for fighting with him in the parking lot. Brett insists that he never fought with Garrett, he was with a stripper named Lexie when the fight happened. Alicia listens to her recording of her interview with Lexi. Brett admits that he was in a fight with Jeff that night – but it wasn’t in the parking lot, it was inside the club.

Next Alicia listens to a recording of Kalinda interviewing Jeff – he insists that Brett is lying and he never got in a fight earlier in the night with him. They also interviewed another stripper named Dakota that was partying with Brett, Jeff, and the rest of the bachelor party that night. She realized that Cary was shady when he questioned Dakota, he warned her that if she didn’t confirm Brett’s alibi with Lexi then he was going to go to jail. Alicia is shocked – she realizes that there is a hole in their case, Dakota was going to tell Cary that he was in a fight in the parking lot and Cary turned off the recorder. Alicia pays Dakota a visit – she reassures Alicia that she has no intention of drudging up the past and testifying. She tells ALiia that the hole in her case is Lexi – she died four years ago from a drug overdose.

Alicia heads to court with Brett Tatro – and the state’s attorney moves to throw out Brett’s alibi. Not only is Lexi dead, but he has a witness named Daniel that worked at the club and says that Lexi was high as a kite the day that Brett got in to the fight. Not only was she high – but Brett Tatro was her drug dealer. Alicia rushes home to listen to her recording of her interview with Daniel six years ago – unfortunately her son Zach recorded over it when he was practicing a speech for school. She panics and calls Cary and asks him if he has any other notes or recordings from the interview – he doesn’t. Alicia listens to Zach’s speech over and over and then calls his phone and leaves him a voicemail.

Cary shows up on Alicia’s doorstep with a box of notes from Brett’s first trial – he admits that he never used them because Alicia decided to take the case in another direction when they were working it together. Alicia reminisces about her and Cary working together 6 years ago, she confesses that she misses how young and positive they were back then. Cary is upset that Kalinda is gone, he didn’t even get to say goodbye to her. Alicia apologizes, and tells him that Kalinda didn’t say goodbye to her either.

Alicia heads back to court and questions Daniel – she points out that in an interview with the news back then DAniel said that he wasn’t in the parking lot during the fight. Alicia shows him a photo from that night with Daniel and his shirt covered in blood – he says that he didn’t hit Daniel, he was just cradling his head when he found him in the parking lot. Alicia also points out that phone records show that Daniel was the first person to call 911 from the club after Jeff was beaten up, but he hung up and never said anything. After court Brett admits to Alicia that he has been lying, he was really in the parking lot that night – but he swears he is innocent and he didn’t punch Jeff.

At court the next day the state’s attorney calls a new witness – a man named Evan Houston, he was working at the gas station across the street. Houston says that he could see the parking lot clearly from the gas station and he saw Brett knock out Jeff Garretts. Houston goes on to say that he told a cop named Hardy the same thing – he even identified Brett in a photo line-up. After court Fynn takes Alicia aside and tells her that Detective Hardy is “old school” and he used to manipulate photo arrays to make sure that they chose the correct person. There was an internal affairs investigation in to Hardy last year, and his use of photo arrays. Alicia heads back to court and attacks Hardy on the stand and points out that he was just investigated last year for false photo ID’s. The judge demands to know how Alicia knows about the investigation because it never went public – she explains that she swore she wouldn’t tell.

Alicia heads home and tells her daughter Grace that she is thinking about starting her own firm – but she would have to work out of the apartment. Grace helps Elizabeth turn Zach’s bedroom in to an office. Afterwards, Zach finally calls her back and says that he is coming home.

In court the next morning Alicia “comes clean” and lies to the judge and says that Kalinda is the one that told her about the internal investigation in to Hardy. The judge is satisfied and agrees to Alicia’s motion to dismiss the case – Brett is a free man. Afterwards Alicia goes out for drins with Fynn to celebrate, she tells him that she is starting her own firm and is only taking on cases that she believes in. She asks Fynn if he will join her.