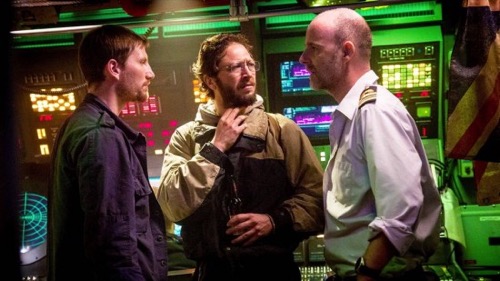 The Last Ship airs tonight on TNT with a new episode an all new Sunday July 12, season 2 episode 5 called “Achilles”. We’ve got your recap down below! On tonight’s episode, Chandler [Eric Dane] and his crew duel against rogue British naval officers manning a nuclear-powered submarine. Meanwhile, Slattery [Adam Baldwin] interrogates a mercenary to learn more about a hospital ship, and a dangerous game of cat-and-mouse ensues.

On the last episode Chandler saw an opportunity to add another vessel to the fleet when a hospital ship was discovered at sea waiting for Dr. Scott’s cure. But tensions rised when Chandler and his team boarded the ship, only to face an unforeseen enemy. Did you watch the last episode? We recapped it all right here for you.

On tonight’s episode per the TNT synopsis “with a small group of survivors from Solace in tow, Chandler and his crew square off against an enemy of the most dangerous kind – a nuclear-powered submarine led by rogue British naval officers, Sean and Ned Ramsey. XO Slattery interrogates a captured mercenary from the hospital ship in an effort to extract information on the sub and its mission. As Nathan James engages in a perilous game of cat-and- mouse, the truth about the mercenary sub unfolds.”

Tonight’s episode of The Last Ship is going to be great. You’re not going to want to miss a minute of the action and we’ll be recapping it live for you as well. While you’re waiting for the episode to begin hit up the comments and tell us your thoughts about the show.

Here is your recap!

There a group of people, much like Bertrise, who are naturally immune to the virus and unfortunately they assume their immunity meant they were the chosen. Chosen for higher purposes that is.

So naturally a cure to the virus is seen as something like an enemy to these people. For they wish to continue being the chosen ones and in their case dominate over everyone else. However, when Captain Chandler finally figured out their plan it was in actuality too late for thousands of people.

See from the moment the USS Nathan James spotted the British submarine they then did their best to learn everything they could about it. Its weaknesses and its strengths. So that it all worked towards their own end game of taking control if not sinking the sub.

But sadly what they found was that the submarine was nearly indestructible.

It was in a word “new”. As in fresh off the line and was technically on its maiden voyage when the pandemic first began. So the Nathan James knew they couldn’t overrun it and were in fact in the weakest position if it came down to a battle on the open seas.

Thus Captain Chandler then attempted to hide his people on open water. They enacted a silencing measure in which no one onboard the Nathan James could make a sound that could later be read on sonar. And for a while this plan worked. But what they hadn’t counted on was patient zero.

Niels had been onboard the sub since the Nathan James first picked them up. So it was Niels that informed the sub’s commander everything he needed to know. Like who Chandler was as the leader of that navy vessel and what his ship was actually capable of.

For although the Nathan James was seeking to evade, the sub was in turn seeking someone upon their ship.

A hostage had been taken after the last battle. And unbeknownst to his interrogators he had swallowed pertinent information that his people wanted. So this man manipulated his way to getting up on deck and following the same thought pattern his friends were going to hit the ship with torpedoes thereby giving him a chance to dive off and swim back to the sub.

Only the hostage ended up having a bad reaction to the flash drive he swallowed so it eventually killed him and ruined any chances he could have given his friends. But again Neils proved useful and he helped the sub figure out where are the labs carrying the cure were located thanks in large part to Rachel and the information had sent her mentor. So even without their friend returning the sub managed to let off several missiles heading to all the various sights carrying the cure.

And that appears to have been their plan along.

The group of immunes wanted to wipe out the cure so that they could take control of the States just like they did to Europe. And while Chandler had set off counter measures, he only stopped two out of the twenty-six missiles. Meaning, at least so far, it is the bad guys that are winning here.

And no one the ship will be heading back to the mainland for quite some time.